A Holistic Approach to Solid Works with Nevers Industries 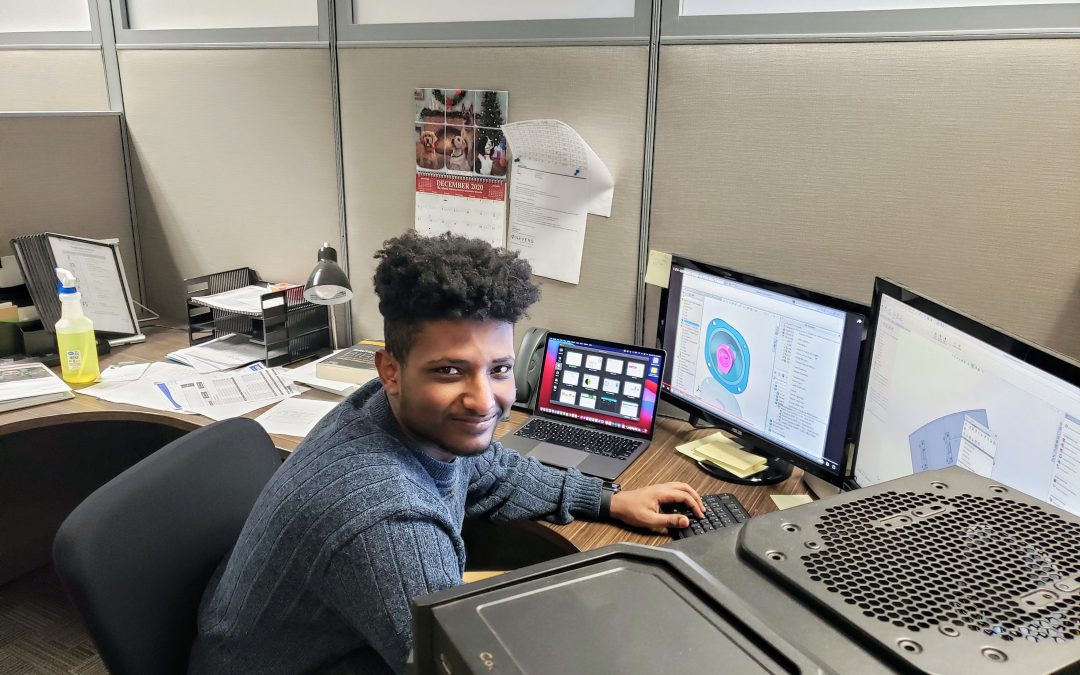 Nevers Industries is a privately held commercial furniture manufacturer based in Maple Grove, MN. The company is currently in the process of transitioning their Engineering software to Solid Works and decided to hire an intern to assist them. Dagmawe Mamo is a mechanical engineering major at St Thomas College and he secured his Nevers internship by applying for the position through the SciTech job board.

“Dagmawe interviewed very well. He had an impressive resume and asked a lot of great questions,” recalled Steve Bloch, an engineer at Nevers Industries. “He was a great fit. Dagmawe’s been part of the engineering group. We’re transitioning from AutoCAD to Solid Works and that’s a huge undertaking. But he’s been instrumental in setting up all the background blocks and libraries so hopefully he’s been getting a good sense of manufacturing with what he does and how that translates to production.”

Constantly learning
When he started in September, Mamo developed and updated the Nevers database in Solid Works. From there he created smart components to streamline the process for their engineers and most recently started improving his abilities with additional training.

“I was learning new things and getting challenged all the time,” Mamo recalled, “I liked applying them to the things I’ve done in school. The constant learning was probably my favorite part about this whole experience.”

The more challenging his tasks became, the more rewarding they were to accomplish. “There are a lot of different ways that you can do something in Solid Works,” Mamo explained. “So when I started Solid Works I was working on more individual-based projects, just creating one part and not caring how other people would interact with it. But here, at a business, where multiple people would interact with these parts multiple times, I had to interpret other people’s processes and it’s given me a more holistic understanding.”

Mentoring an intern
Mamo worked closely with James Brecht, an engineering manager at Nevers. It was Brecht’s first time working with an intern, but he was inspired by how his father used to take interns on at his business, always hearing about how the interns came back and how they often learned more during the few months working in the industry than they did in school.

“That’s why I put a lot of focus into his training, instead of the mundane, repetitive tasks that wouldn’t mean a lot to him,” Brecht said. And in the end, they both gave as much as they got. “Given his professionalism, his attendance, his respect for everyone -He’s top notch and he’d be a great employee to anyone out there,” Brecht said proudly.

“He knocked it out of the park,” Bloch agreed. “Dagmawe’s everything we could have hoped for.”