A SciTech All Star 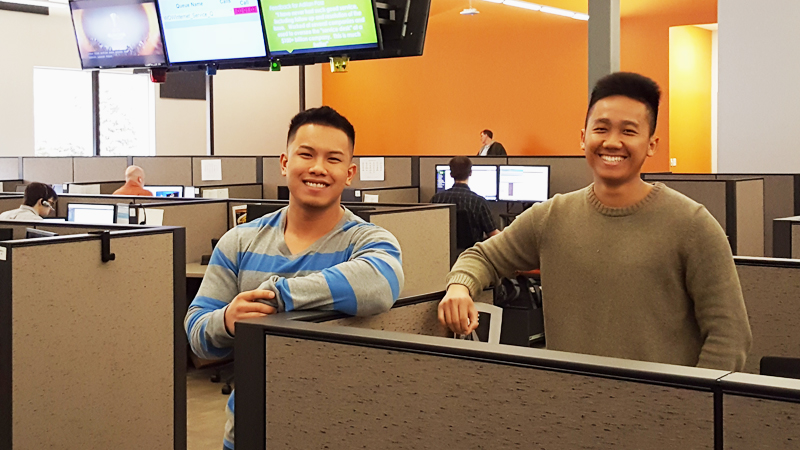 If MHTA had a SciTech Hall Of Fame, Virteva would be an early inductee. Virteva is an independent IT consulting and managed services firm providing a variety of as-a-service solutions, such as focused consulting, on-demand resources, and a 24/7 service desk to enterprise clients and medium-sized businesses. They have been hiring interns consistently since the SciTech Program’s inception in 2012. In many cases, interns at Virteva have become full-time employees and that is exactly what happened with two of this year’s interns. Liheang Prom, a senior studying IT Information Systems at the U of M and Phong Nguyen, a senior studying computer science at Augsburg College, recently accepted offers to join Virteva full-time after their internships were completed earlier this spring.

IT: One Part Technical Skills, One Part Customer Service

When someone calls Virteva to speak with a representative it’s because they’re struggling with a technical issue – and chances are, they’re frustrated. As a career, IT demands equal parts technical expertise and human to human customer service abilities. Prom and Nguyen have both developed strategies for staying calm throughout their conversations and de-escalating any potentially irritated customers. Nguyen has learned to “alleviate [the customer’s] anger by diverting their attention with questions while troubleshooting and solving the problem.” Prom says the key to success is learning to control the conversation and working fast. “You sometimes have to find a solution in seconds,” he says.

Virteva has had great success using internships as a pipeline for developing and retaining talent. Since becoming involved with SciTech in 2012, roughly 10 Virteva interns have been hired full-time after their internships concluded. “From the business side we’re hoping to find interns who we can convert into full-time employees and who can provide long term value to the company,” says Hallstrom, Virteva’s HR Generalist. Virteva also sees internships as a way to give back to the community and help students jump start their careers. “Our goal is to give back through MHTA by providing opportunities to STEM students,” adds Hallstrom. An internship program allows Virteva to accomplish both goals simultaneously – developing full time talent and having a positive impact on the community.

It’s no wonder that Virteva is able to attract strong interns year after year. The company’s work environment is collaborative and the employees share a strong sense of community. “Every time I come in to work, it’s always such a warm, welcoming feeling. People say hello, shake my hand and ask me how my weekend went,” Nguyen says. “They have very strong camaraderie and a bond that makes them very successful as well,” adds Hallstrom, “They’re working toward a common goal but also really get along and enjoy being around each other.”

Virteva has plans to hire additional interns in 2017. Companies may hire up to 5 interns per program year (September – August) through the SciTech Internship Program. Some employers have found that bringing in a team of interns actually creates less work for the staff than hiring just one. SciTech reimburses companies for 50% of their STEM intern’s wages – up to $2,500 per student. There are approximately 95 wage matches remaining for the 2017 program year, so it’s not too late for employers to get started at SciTechMN.org. More than 900 college STEM students have been pre-screened and are ready to be hired. Employers and students can contact the SciTech Program Director, Becky Siekmeier, at beckys@mhta.org or 952-230-4241 with any questions.