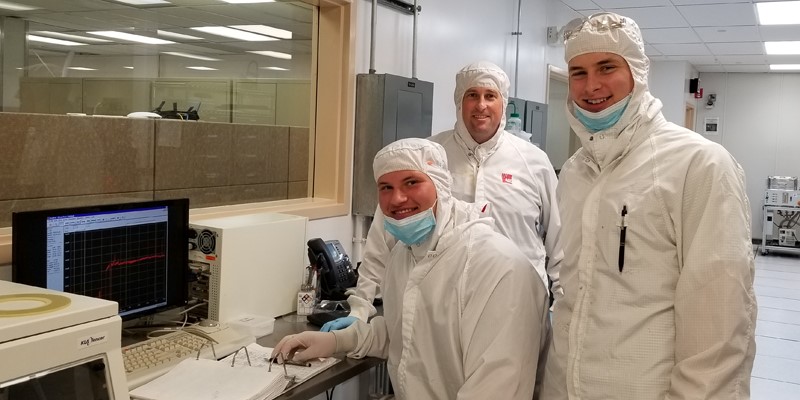 Advanced Research Corporation (ARC) in White Bear Lake is a high tech contract R&D and manufacturing company, performing both device fabrication and precision machining. One of the core products that they manufacture is called a wafer.

A what?
“Any computer chip starts its life as a silicon wafer,” said Steve Ellison, (center) ARC’s Executive Vice President. “The silicon is a bulk crystal formed into a flat plate. From there, you implant, deposit or etch all the features that end up making the computer chip. Then you cut it out from the wafer.”

Ellison started with ARC as a part-time student worker in 1995. He did much of the same work that the company’s current SciTech interns are working on now.

“Stick around,” Ellison said to the interns, “you could be me!”

Meet the Interns
Colin Borsheim, (right) is a senior in Mechanical Engineering at the University of Minnesota – Twin Cities. Although he only has 16 credits left, it will still be a while before he graduates. Borsheim is a member of Minnesota’s Army National Guard, and will be leaving soon for an 11 month tour of duty. ARC has liked his work so much that they’ve brought Borsheim back for 3 internships, working around his military schedule.

Kaleb Siekmeier (left), also at the U, is a rising junior majoring in Aerospace Engineering with a minor in Astrophysics. In addition to being a student, Siekmeier is an athlete, competing in the discus and hammer for the Gopher Men’s Track & Field team. This is Siekmeier’s first internship.

High tech dress code
Borsheim and Siekmeier are both working on the “wafer fab” side of the business. Here they make sensing devices for scientific instruments. This involves suiting up – wearing a “bunny suit” – to go into the clean room, to reduce the amount of dust that might come in.

Borsheim helps manage facility controls and works in quality testing. In addition, he spends time in the lab running machines that deposit metals on the wafers.

“It’s like painting, only much more complex,” he explained.

Siekmeier was brought on board to take apart and rebuild one of the clean room machines that hasn’t been operational.

“After shadowing Colin for a few days, I was as able to work on the machine on my own,” Siekmeier said. A few weeks later, he moved into the clean room to help with quality control activities as well.

Challenging – but in a good way
When asked what surprised them most about working at ARC, both students gave kudos to the challenges they faced.

Borsheim agreed, saying “I expected to be mentally challenged throughout the day, and I was correct about that. You go home a little more tired than most jobs,” he said, even though the work isn’t particularly physical in nature.

Finding a good fit
When looking for interns, ARC looks for people with a good work ethic and those willing to do some homework. Ellison says he can tell whether a candidate is tracking what the company does by whether they ask any questions. He advises students to “do a little bit of research on the company – see if you can understand the basic concepts of what they do. Showing interest goes a long way.”