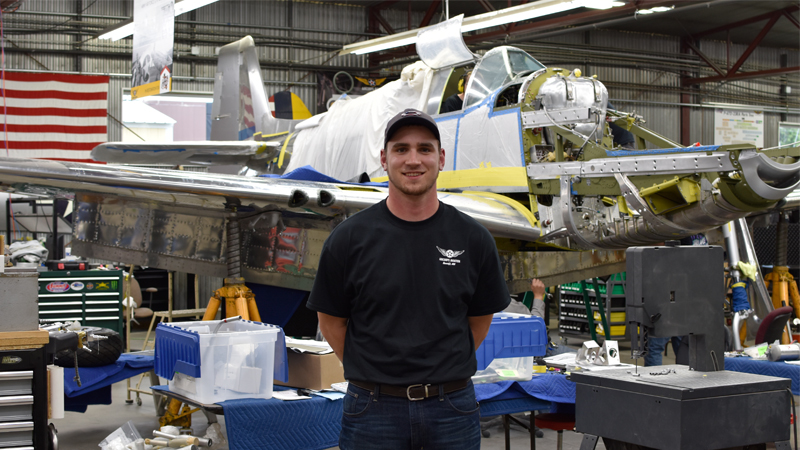 Americans who served in the military during World War II or contributed to the war effort from home are often referred to as the Greatest Generation. And as time passes, we’re losing more and more of these heroes. One company in Bemidji is working to keep their stories alive in an interesting and exciting way: through the restoration of World War II-era aircraft.

AirCorps Aviation was founded in 2011 and specializes in the restoration, maintenance, and rebuilding of vintage World War II aircraft. The company has already built extensive experience with more than 20 Warbird variants. Their customers share their passion and excitement — and want to pass it along to the next generation so the stories aren’t forgotten. AirCorps Aviation employees have gone all over the world to assist in the recovery of these aircraft.

“This company is really well know known for doing factory authentic restorations down to the color of the rivets that get used and the stampings on the sheetmetal and the fabric covering on wiring,” said Sara Zimmerman, Business Cordinator at AirCorps Aviation.

In addition to their restoration shop, the company has a location at the Bemidji airport — for final assembly and flying — and both a physical and digital library filled with manuals and drawings. For more information about Lope’s Hope 3rd, the plane shown in the photo above, see the “Spotlight” section at the end of this article.

SciTech intern, Nick Bodensteiner (shown above), is helping the company improve its documentation and standardize important processes. Bodensteiner, a junior at the University of North Dakota – Grand Forks, was excited about the opportunity — despite not having much experience with airplanes.

“To be honest, I haven’t done much with airplanes at all, but being an engineer, you look for those unique opportunities and unique challenges,” said Bodensteiner. “It’s different from working on some ‘no-name whatever.’ There’s always a different challenge every day.”

In his internship, Bodensteiner is working on tasks important to a young company like AirCorps Aviation: documentation, safety consulting, and building a brand-new inventory system. Nick was excited that his projects will stick around and help the company long after his internship is over.

“Instead of complaining about what the guy wrote 40 years ago, you can write it yourself — and then someone can complain about my work in 40 years,” he said with a laugh.

Nick said he also enjoyed working at a small company. “Any question you have for someone, you can just walk up and ask them. There’s a small-town feel, and the effect you have is greater.”

Unsurprisingly, Zimmerman and the AirCorps Aviation team are impressed and excited by the work.

“It’s huge to have to all of our processes in someone’s head written down somewhere where someone else can benefit in the future,” she said. “Our interns started on a Monday and handed me a first draft of an equipment operating manual on Thursday morning – I was flabbergasted. It’s been very impressive. It goes so far in the minds of our department leaders on the value of interns and hosting internships. It makes a difference.”

To learn more or enroll in SciTech, check out SciTechMN.org. The new program year begins September 1, 2017. 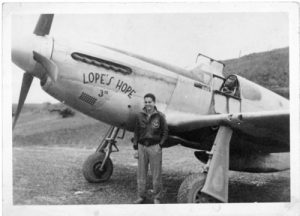 Lope’s Hope 3rd was a P-51C flown by Lt. Donald Lopez.  Donald and Lope’s Hope 3rd served in the China-Burma-India theater with the 14th Air Force, 23rd Fighter Group, 75th Squadron.  The 23rd Fighter Group was the descendent of the famous American Volunteer Group or Flying Tigers after the US entered the war.  Lt. Lopez had 5 victories in China and went on to become a test pilot in the early years of the jet age. Later he was the deputy director of the Smithsonian National Air and Space museum until his death in 2008. Donald Lopez was instrumental in the construction and opening of the National Air and Space Museum.

The original wartime Lope’s Hope 3rd was a P51C-5-NT, Army Air Force Serial Number: 42-103585.  The serial number information was just acquired this week through the generous contribution of pages from Lt. Lopez’s war time log book by his granddaughter Laura Lopez.  Normally a WWII fighter’s serial number is easily determined by just looking at the tail number. Squadrons in almost every theater of operations number planes this way, but not in China. In China the 23rd Fighter Group’s squadrons were assigned a block of numbers for differentiating their aircraft.  The 75th squadron’s block was 150- 199 (or to 200 depending on source).  Lt. Lopez used 194 on both his P-40N s and on his P-51C , Lope’s Hope 3rd. Without his log book it might have been impossible to figure out his Mustang’s AAF serial number.

Our restoration airframe is a P-51C-10NT Army Air Force Serial Number:    43-24907, that remained in the continental US during WWII and was used for training purposes during and immediately after the war. The decision to paint her in Lt. Lopez’s color scheme is intended to honor him and his service to his country in WWII and to aviation all his life.