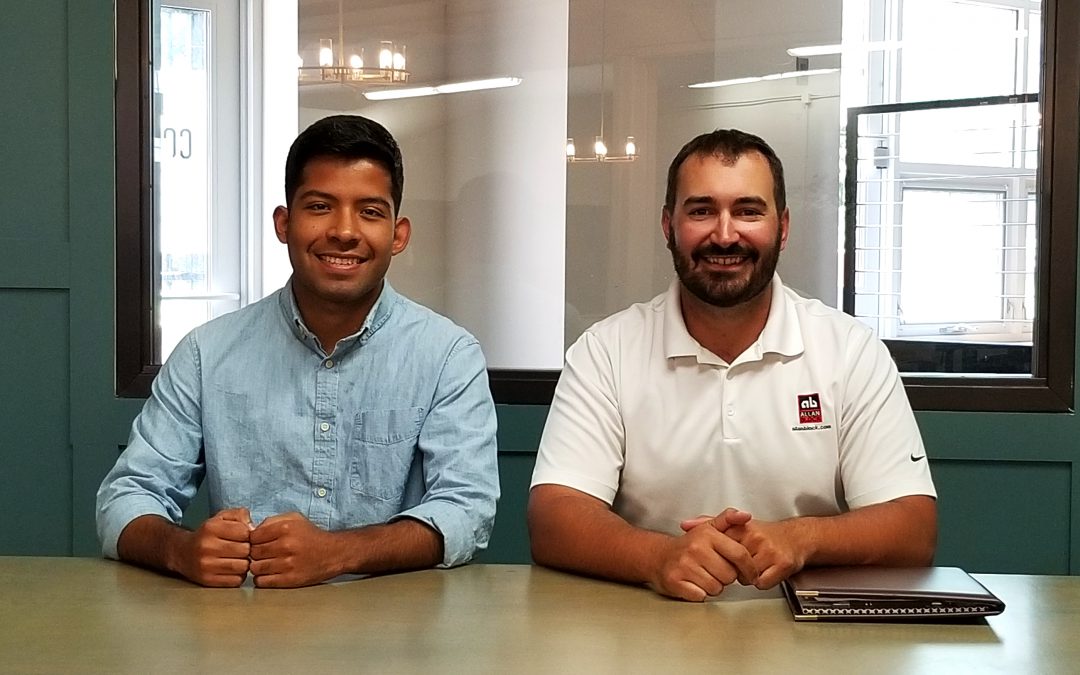 Kyle Huerd (right) is not one to let moss grow under his feet. He joined the US Army while still in high school, setting his sights on a military career. After serving four years as a foot soldier, however, his plans changed when he was injured and he found himself transitioning quickly into to civilian life.

Huerd had reconstructive surgery on August 25, 2009 and started working on his civil engineering degree at the University of Minnesota – Duluth (UMD) on August 31. That’s right – 6 DAYS LATER. Huerd makes decisions and moves forward.

Fast forward 10 years
In November 2018, Huerd launched GeoWall Designs, LLC while still working fulltime for another company. Four months later, he cut the cord and jumped into being a fulltime entrepreneur.

GeoWall Designs specializes in geo-structures, “anything built on the ground or in the ground,” says Huerd. Ninety percent of his business is retaining walls. Because not too many firms specialize in retaining walls, Huerd says, “there’s a big opportunity out there for me.”

From the start, he had more projects than he could manage alone. “Without David this summer I would have been buried in work,” said Huerd.

All is fair in love and internships
Like many engineering students, David Mendoza-Cruz (left) has always liked math and science. His interest in construction, especially structures, led him to pursue civil engineering at UMD.

Mendoza-Cruz was referred to SciTech by an engineering firm in Duluth. Less than twelve hours after creating a profile on SciTechMN.org, he was contacted by Huerd.

“From the beginning I was hoping to find an internship down in the Cities so I could stay home, closer to friends and family this summer,” said Mendoza-Cruz. The other company in Duluth was a good sport about the situation, and left the door open for Mendoza-Cruz to join them in the future.

Huerd confesses that he got a bit of a late start on his intern search, and used his LinkedIn network as a resource. Sara Sargent of VSI Labs (another SciTech employer) referred him to the program. He couldn’t believe his good fortune; ten minutes after Sargent’s referral, he messaged her back saying, “This is amazing!”

Up for the challenge
Huerd learned early on the importance testing one’s skillset and applied that to Mendoza-Cruz’s internship.

“Thankfully, I’ve had nice employers or managers through the process that have challenged me,” said Huerd. “So, that’s what I want to do as an entrepreneur and as I hire people.”

Even though this is Mendoza-Cruz’s first internship, he stood out from the start by demonstrating in his interview that he was willing to be independent and flexible. Over the summer, Mendoza-Cruz improved these skills and learned a lot about the importance of time management.

Mendoza-Cruz works about 30 hours per week, and it’s up to him to determine how to finish tasks because there is no set schedule. They meet in a co-working space or on job sites to go through project schedules and questions.

His technical skills were enhanced as well. He learned how to use multiple design programs, to run calculations like internal and external forces on retaining walls. He also beefed up his expertise in AutoCAD.

Building blocks
Mendoza-Cruz’s most memorable moment was having an opportunity to work in the field alongside one of GeoWalls’ contractors to build a retaining wall. By helping lay the block, he had an opportunity to see the process up close.

“Sweating with the guys,” he says, “definitely helped me with future designs. There are people out there that are actually going to be following these plans. It makes you try to think, “what’s the easiest way for them to build it?’”

Mendoza-Cruz has an interest in being an entrepreneur someday, and Huerd is happy to share his journey with him. “I eventually want to be my own boss and see where that leads,” said Mendoza-Cruz, “thanks to this unique experience I believe I’m on the path to reach this goal.”