Creativity and Responsibility: An Internship with Advisory Aerospace 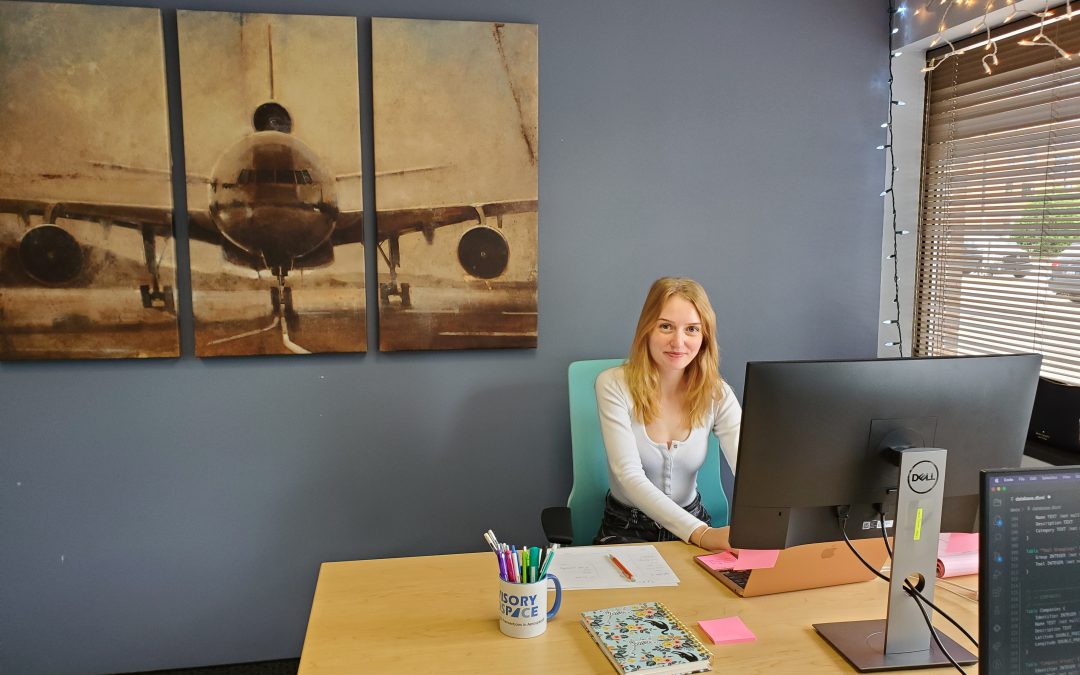 Advisory Aerospace has seen enough expansion in the last few years that they recently upgraded their office space to better accommodate a growing team. A big part of this software provider’s talent acquisition comes from their successful approach to internships.

“Our senior-most tech guy started here as a SciTech intern,” said Managing Director Vivek Saxena, “and 50 percent of the time when we host interns, we make them a fulltime offer.”

With their growth, Advisory Aerospace has also expanded their capabilities and the industries that they serve, branching into med tech and looking into new ways to automate their software. This means hiring more computer science and data science majors. When the decision was made this spring to hire an intern to update their website, Saxena knew where to turn.

“We interviewed a dozen candidates. Natalie’s interests were at the intersection of computer science and marketing, just what we needed,” Saxena said.

Becoming a decision maker
During her academic career, Natalie Paulson went from pre-med to mechanical engineering to computer science. Now pursuing her degree in comp sci at the University of Minnesota, she’s found a major that mixes STEM with the chance to be creative.

Working at Advisory Aerospace, Paulson put her tech savvy and creativity to the test by rebuilding the company’s website from scratch.

“It’s quite gratifying, however it took a lot of work to get there,” Paulson said. “I probably made three websites before the real one launched. But each iteration always gets better, and you always learn how to do something differently. In some ways it was daunting to have a lot of that responsibility, because suddenly I’m the final decision maker for a lot of things and I had to learn to trust my instincts with a lot of my choices. But it was something I eventually got used to and ended up really enjoying.”

Trusting their interns with that level of responsibility is one of Saxena’s keys to internship success. “You need to treat your part time interns as if they were full time. Give them responsibility,” he said confidently. “Pretty much every task that Natalie’s done for Advisory Aerospace has been amazing. She has a lot to contribute.”

Room to grow
Paulson’s time at Advisory Aerospace has gone from spring internship to summer internship to a full time job. Expanding her responsibilities to include wireframing and prototyping, she even got the opportunity to present to the company’s board of advisors.

“I appreciate the vast amount of trust that’s been given to me,” Paulson said. “I’ve been solo on a lot of tasks which comes with a lot of creative freedom, and I’m thankful that I’ve been trusted to do that well.”