Intern Goes Below Ground for an Above Average Experience 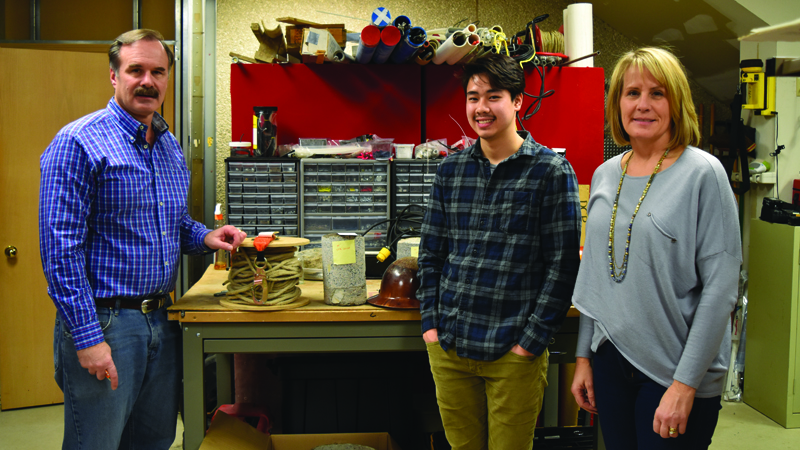 STEM internships can take students to some unusual places. That’s how SciTech intern Khai Tran found himself one hundred feet underground, walking through a storm tunnel built in the 1970s. Tran’s journey from the world above to world below began with an email in 2017, notifying him about available, civil engineering internships in the Twin Cities. That’s where Tran first came across CNA consulting.

Perched on the edge of the University of Minnesota (U of M) campus, CNA Consulting Engineers provides construction and mining industry services for geotechnical, geostructural, civil, structural and construction engineering.

In other words, said Brent Nelson, a Project Manager at CNA, “We’re a civil engineering firm but we specialize in underground engineering,”

Their firm is responsible for designing and construction monitoring of both the highway 61 tunnels on Minnesota’s north shore, designing the excavation and support for the University of Minnesota Civil Engineering building, designing and construction monitoring of the Andersen Library as well as the light rail tunnel at the Minneapolis St. Paul International Airport.

Since 1979, CNA has hired three interns every year for the past 30 years. With the interns earning wages as they work, that can start adding up. In 2017, CNA decided to try something a little different and signed up for the SciTech Internship Program, receiving a dollar for dollar wage match that helped pay for half of Tran’s wages during his internship.

CNA is proud to pay their interns while providing them with essential, in-the field training and experience, Nelson said, “and we sure appreciate getting a grant to help us do that.”

Before he was hired, Tran and CNA underwent the usual interview process, but it soon became evident that the two were a good match. What stood out most to Tran was the uniqueness of the opportunity.

“It’s definitely a niche, this company,” he said. “Most civil engineering firms are building structures instead of geo-structural, so we get to go down into the sewers and we get to see the storm drains and stuff like that, which other building engineers don’t get to see. It’s definitely unique and interesting.”

Upon starting his internship in October last year, Tran got straight to work. “Right when I started, they introduced me to the boring database,” Tran recalled, quickly clarifying that he meant the word in the geological sense –core soil samples. “It’s a very exciting boring database.”

Previously, CNA used a paper file system of boring records that were taken years ago. CNA wanted them put in a single, digital database. Tran would later say this was the greatest challenge he faced at CNA; coming up with a way to organize and input the information.

“We had to wing it and there was no way of doing it that was previously implemented,” Tran said. “They asked me, ‘how do you think this should be done?’ So I had to come up with a way.”

At the time, an outside bidder offered to take care of the project for –in Tran’s words- “a crazy amount of money.” By having Tran design the database with software they already had in place, CNA saved a lot of money.

“He does a lot of good work,” Nelson said, “and we’re very impressed.”

Skills to Live by

“I’m getting more of a feel for the professional engineering setting as a whole,” Tran said. “Redlines, for example; that was a useful skill that I didn’t have before.” During this regular part of the internship, a CNA engineer would give Tran an AutoCAD file marked with red lines, indicating areas that needed to be corrected. Tran would fix the drawing, give it back to them and they’d mark it up again. This sort of task is present at every engineering firm, and now Tran is prepared for it.

But his exposure to industry programs didn’t stop there. AutoCAD, Revit and Risa were all made available to Tran during his internship. “I’m definitely better at AutoCAD since when I first started,” he said. “This is software that I’ll be using throughout my career. When CNA told me in my interview that I’d be using them a lot, it was definitely enticing.”

Site visits are fairly common as well, to see in-person the jobs he was previously working on and understand how the drawings and construction come together.

“That’s pretty cool,” Tran said. “I think it’s probably my favorite part of the job: Seeing all the sketches and calculations in person and up close.”

Once a week Tran accompanies CNA engineers out in the field. These half-day trips include site inspections, filling out paperwork and spreadsheets and updating reports.

Now, five months into the internship, Tran’s site visits are delving deeper than ever before. “Yesterday was pretty memorable,” he said. “We went down a shaft that was a hundred feet deep to a tunnel that was miles long.”

Walking through a storm tunnel, Tran accompanied a CNA engineer on a site inspection beneath the City of St. Paul. The tunnel was built in the 1970s and CNA is currently working to assess and repair water damage.

“The shaft was 12 feet in diameter,” Tran recalled, “and we were lowered down in this little cage. There was a tarp over the top so we couldn’t see around. It was totally black and it was raining on us.

“It was pretty terrifying, but also exhilarating at the same time. I learned a lot, actually. Because it was a lot of walking, the engineer and I did a lot of talking about project management, how CNA operates in general and just the general history of civil engineering. I learned about the difference between design-bid-builds verses design builds, how we work with the clients and discussions with the contractors or architects. It was all really interesting.”

Perhaps more remarkable than a journey into the earth, is the journey CNA and Tran have taken together. “As (our interns) grow in what they’re learning academically,” CNA said, “we can incorporate more and more into what they can do. There’s a natural progression there.”

Tran recalled how, when he was interviewing for internships, CNA was one of the only companies that not only asked him about the classes he was taking but wanted to build an internship around his expanding skillset. He liked this approach, Tran said, because it meant that CNA wouldn’t resort to a generic curriculum. Instead, they said, “As you grow, we’ll grow with you.” And that meant a lot.

About SciTech
SciTech will support at least 300 internships in 2018 where employers can receive a 50% wage match worth up to $2,500. These internships help employers build their talent pipeline and unleash productivity while providing students with valuable hands-on experience and opportunities to solve real-world challenges. SciTech aims to prepare and retain Minnesota’s STEM workforce by connecting STEM college students to internships that enhance their industry experience and give them exposure to opportunities within the state.