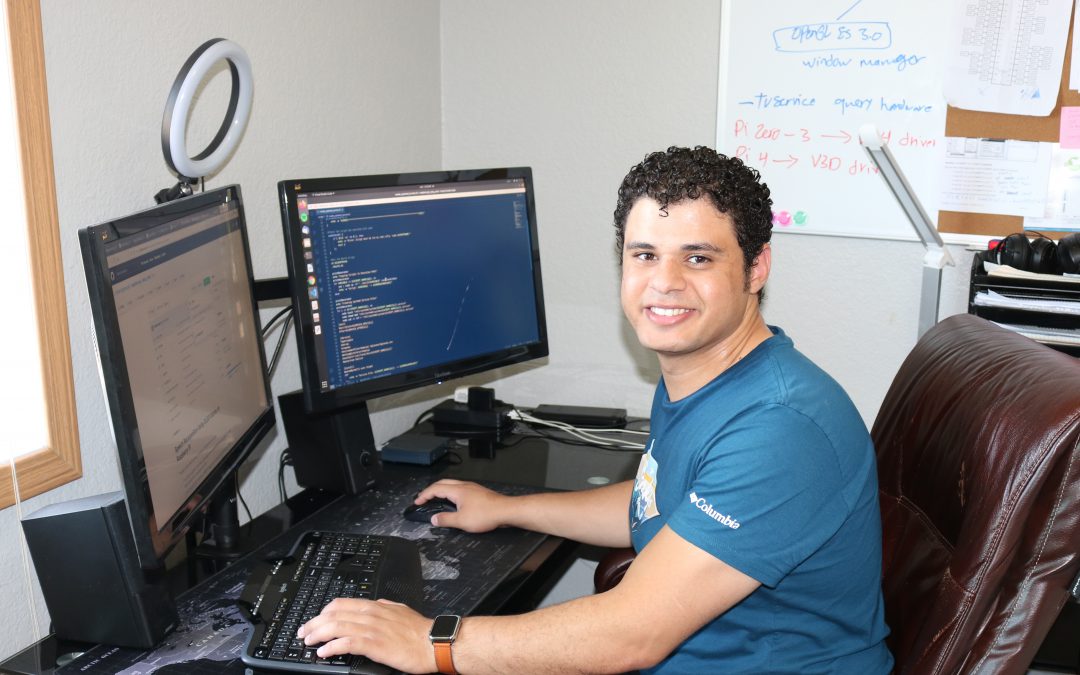 Founded by two Minnesota State University Mankato graduates, Hearing Glasses LLC is in the process of developing a visual solution for people who are hard of hearing. What started as a concept, first created for a business competition, has since progressed to the prototype phase. Founders Abdel Elkenawy and Kaitlyn Gloege are developing a pair of smart glasses equipped with voice-to-text technology that provide live closed captioning for the hearing-impaired.

“It started as a fun project and now we’re taking it to the next level,” Elkenawy said. The Hearing Glasses team were finalists in this year’s Big Ideas Challenge at Mankato State and won third place in the student division of the Minnesota Cup startup competition.

Having recently been accepted into an accelerator program to help launch their company, Gloege said “We realized that we can’t do everything on our own.” They needed an intern. Fortunately, Elkenawy knew just the computer engineer for the job, his classmate Mohamed Elshahawi, who they hired with financial assistance from the SciTech Internship Program.

A challenge with a purpose
“I’ve always been interested in accessibility,” Elshahawi said. “So the fact that we’re targeting people who are hard of hearing and helping them is great.” Elshahawi’s cousin has a son who is deaf. Having that personal connection, he said, has made working on the project all the more meaningful. “It’s exciting for me to work on something that can help people like him feel more included and be independent.”

So far in his internship, Elshahawi’s tasks have been split between software and hardware. In helping develop the prototype, it’s his job to ensure the voice-to-text software is working as it should. Lately they’ve even incorporated elements of machine learning to enhance this feature.

“It’s a challenge and I like that about it,” Elshahawi said. “We’re making good progress.”

From students to entrepreneurs
With how quickly Hearing Glasses has taken off, these budding entrepreneurs have learned a lot in a short amount of time, including how to manage an intern.

“We’re still students at the end of the day so we’re still figuring it all out,” Elkenawy admitted.

From Elshahawi’s perspective, however, they’re taking the right approach. “I like that they give me the freedom to work at my own pace and figure things out on my own. At the same time, they still make themselves available for me to ask questions.”

Their advice to fellow ambitious students: “Don’t let anyone tell you that it’s crazy or it’s not a good idea” said Gloege. “Because it’s not their idea and if you’re passionate about it you can make anything work. And definitely make connections with people. If we didn’t have all the connections that we did, we wouldn’t have gotten this far. That’s one of the biggest things we’ve learned.”

“Be passionate!”  Elkenawy agreed. “If you believe in it, you can make it.”

With Elshahawi’s help, the team is working hard toward commercialization. Hearing Glasses applications for Android and iOS are coming soon.  ​