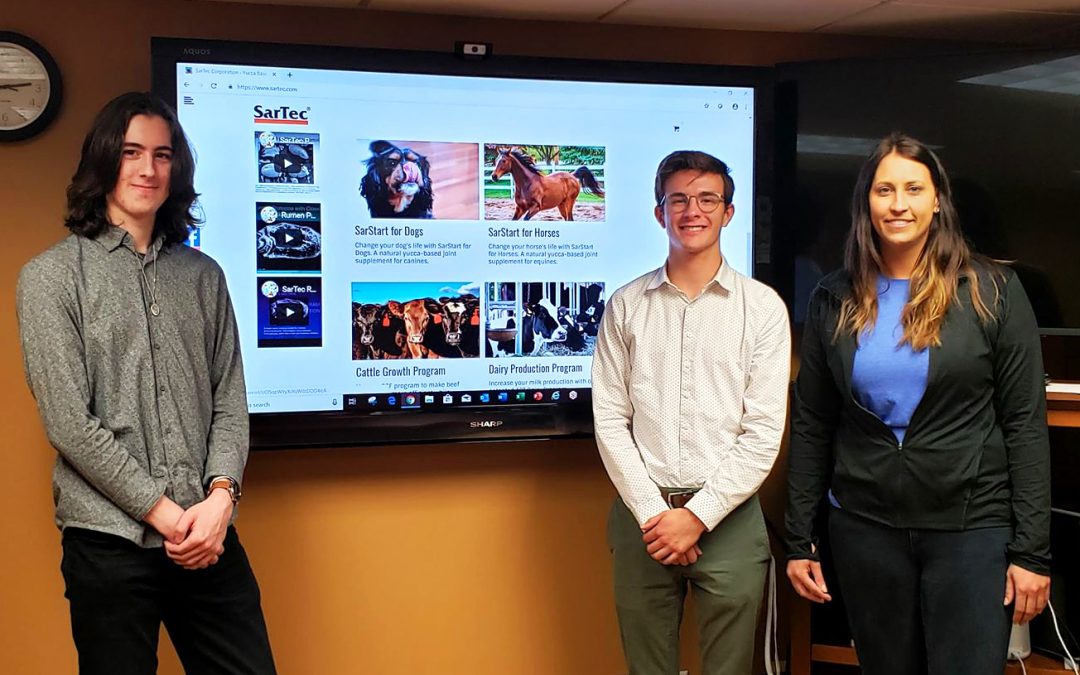 The Yucca plant contains an edible surfactant (a wetting agent) that naturally helps increase the moisture in grains such as cattle feed and grass. SarTec, an Anoka-based manufacturer, has based the core of its business around the research, development and production of yucca-based products, servicing everything from golf courses to the cattle industry.

SarTec has found that adding interns to their team is a great benefit, and for the last seven years has partnered with the SciTech Internship Program to help fill their roster.

“The work they do is one thing, but I think, it’s the fact that we’re exposed to these students first. It’s really a good way to meet the students and test them out,” said Pete Greuel, SarTec’s General Manager. Since using the program, SarTec has brought two of their past interns on fulltime, creating a reliable talent pipeline for their growing workforce needs.

This spring, Spencer Grzincich and Tony Arnold joined the ranks of SarTec interns. Their task was to design a new website for the company, and though it came with some bumps and challenges, each test served as an opportunity to learn something new.

“We ended up designing modules for the website that we weren’t originally expecting,” said Grzincich. “So it was a really great experience working more with the hosting side of the site. It involved a lot of learning as you go.”

This particular internship didn’t involve a lot of “hand-holding,” but both Grzincich and Arnold prefered it that way. An average day on the job consisted of coming in to work, mapping out the tasks they wanted to complete, working on said projects and collaborating when needed.

Being in charge of their own schedule, Grzincich added, “has been awesome.”

“With these guys, it was so easy,” said Julie Jenkins, SarTec’s Assistant General Manager. “We were able to say, ‘this is what we need’ and they were like, ‘Yep! We’ve got it.’ That’s been awesome.”

What to do when you think ‘the world is ending’
Working on the SarTec site was their first time designing a website this large, Grzincich explained. “There’s definitely some things that you wouldn’t think would cause a site to react the way it did.” Making mistakes is part of the experience and at one point during the build, something on the test site ‘broke’.

“We thought the world was ending,” Grzincich said, laughing about it now. Their solution was a learning experience in itself. Together they backtracked through their recent changes, testing and revising as they went, until they pinpointed the problem. After that it was an easy fix.

Do you speak code?
“At the time, web development was still very new to me,” Arnold said. “I had taken a class just that spring and that was where a lot of my knowledge came from. At first I thought this would take me longer to learn and pick up, but it was actually surprisingly quick.”

Part of this ease, they agreed, came from having a strong base understanding of other coding languages. That helped them pick up new ones much quicker.

“I would credit the languages, like Java Script and HTML, for being fairly intuitive,” Grzincich added. “I think having a background in different math programs helps you get used to how those languages operate. So the similarity between them allowed for a smooth transition.”

SarTec live
All of their trials and triumphs lead to the website’s official launch. SarTec.com is now live, thanks to Arnold and Grzincich’s updates.

“It was almost a moment of disbelief,” Arnold said. “You spend an entire spring working on this website to then look back on it and it’s like, ‘Wow. I actually did this.’ It’s kind of crazy.”

Gruel and Jenkins helped their interns when guidance was needed but in the end, the cost-benefit of bringing them on, mentoring them and seeing what they accomplished was a win-win. “They were a real pleasure to work with,” Greuel said. “The SciTech program is very important and special too. We really enjoy it,”

Get Involved
Learn more about the SciTech Internship Program, apply online and create your own meaningful internships that support your company and Minnesota’s growing STEM workforce.

Small Minnesota companies receive up to $2,500 to help pay a STEM intern. At least 350 wage matches are available through August 2019.