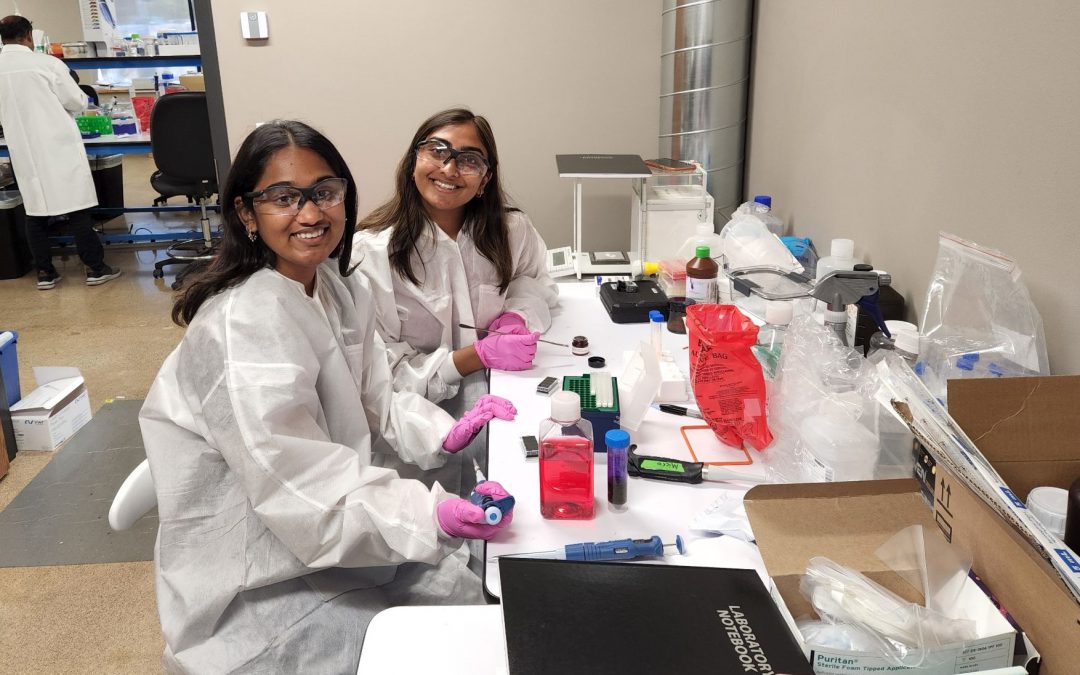 CEO Emily Stein “fell in love with bacteria” long before building a business around it. When her grandmother experienced a stroke due to a dental disease, Stein took action and founded Primal Health LLC with the goal of addressing the unmet needs within the oral hygiene market.

Several years and a few SBIR grants later, this biotech startup now has products in use on the international space station. But Stein didn’t get there alone. By regularly hiring college interns over the summer, she can make significant progress on her projects while fostering future scientists in a very hands-on lab environment.

Independent Interns
This year’s cohort included Neuroscience Major Mausam Shah and Genomics Major Aavni Varadhan. As first-time interns, both were pleasantly surprised by the level of responsibility and autonomy they were given.

“My assumption coming in was that they were going to tell us what to do and then we’d do exactly that. I didn’t think we’d be doing our own experiment and deciding on what controls we want to use and how we want to look at the data,” Shah said. “When we’re working here, we have a lot more freedom.”

“It’s been a lot of experiential learning that we don’t get in a classroom setting. So here, just being so hands-on, I’ve learned more in a month and a half than I have in a class,” Varadhan agreed.

This freedom is very intentional. Stein’s approach to internships is to offer guidance while encouraging the students to problem solve on their own.

“You have to pivot and be flexible. That’s really important,” Stein said. “I want to create a space and an opportunity where people are inspired to be creative.”

Trust your gut
Together Shah and Varadhan worked on a women’s health project, tested products, practiced pipetting and plating, and measured absorbance. They had just taken on a new oral band o-ring (orthodontic)  project in July and were starting to design their own experiments.

“We’re spearheading our own ideas,” Varadhan said proudly, which is especially significant given that those ideas are taking shape in a real-world lab setting, where many of their fellow students haven’t had any lab time due to Covid.

“Having this lab work experience every day, we’re going to be more successful. It’s a huge advantage,” Varadhan added.

With the encouragement to think of an idea and try it out, regardless if it works or not, Shah and Varadhan are learning from their successes and their mistakes, curating their independence.

What her interns uncover along the way benefits Primal Health as well, Stein said, “With every experiment, they’re showing us data and shining a light in areas that have previously been dark. So, trust your gut about people, projects, experiments, everything. If you trust yourself, you’ll be more successful.”

Get involved!
SciTech’s new program year begins September 1st! Companies and students can enroll now to be preapproved for the Fall. Post a job, connect with talent, find an internship that sets you ahead in your career!