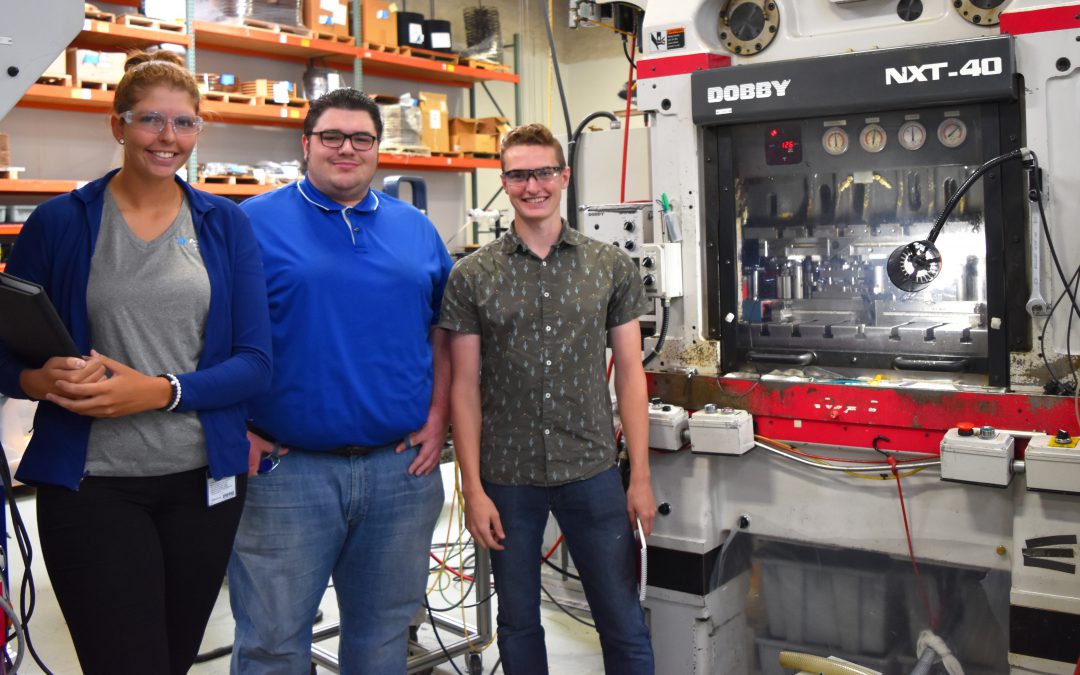 For 40 years, Meier Tool and Engineering has been perfecting the art of metal stamping. Within the walls of its 35,000 square-foot facility, the manufacturing floor is alight with massive machines producing the tiniest parts for medical devices. In this industry, precision and quality is key, and Meier is dedicated to passing those qualities on to their interns and future quality engineers.

In the spring of 2018, Meier hired interns Isaac Jauch and Jonathan Reak through the SciTech Internship Program. In 2019, they brought them back for a second round, adding to the team Emma Hylen, an industrial engineering major from Iowa State University, to work within the engineering department.

The projects they worked on and the skills they developed meant a lot, but all three agreed that it was Meier’s company culture that really made the experience.

“The culture is very welcoming, especially to interns,” Reak said. “My first year here, it felt like a family.”

This is Hylen’s second internship working in her field, but it’s the first time that she actually felt she was part of a team. Her experience working with Meier was more hands-on and inclusive, she said, “They consult with me, not just tell me what to do.”

With a majority of Jauch’s projects centering on machine upgrades and process improvements, he was pleased to find that his responsibilities increased his second year back. “I have a lot more trust from the people managing me,” Jauch said proudly.

A positive investment
Christine Bjerkebek, a Meier quality assurance manager, explained how the company has really embraced the importance of providing engaging and instructional internships, especially where quality is concerned.

“We bring in interns to develop quality engineers for our businesses future,” Bjerkebek said, “In fact, we’ve probably hired 80 percent of our quality engineering interns. Quality engineering isn’t something that people typically choose to go into, so bringing students in and showing them what it’s about is a really high strategy.”

As part of Reak’s second internship here, Meier helped him upgrade his abilities when they assigned him to a specialized quality engineering concept. Reak leaped at the opportunity. “I’m glad they gave me a project that I was sort of unfamiliar with so I could really broaden my knowledge base.”

One of their quality projects took place within Meier’s metal finishing area which deals with a lot of caustic chemicals. The scope of the project, Jauch recalled, became broader the longer it went on and required them to evolve alongside the demands to get the work done. The result was a win-win for both the interns and the company.

“You guys did such a good job,” Bjerkebek said “We had our regulators come in that audit us and they remarked that they’ve never seen an area that does work in that process look that nice.”

It’s safe to say that when it comes to quality internships, Meier passes with flying colors.