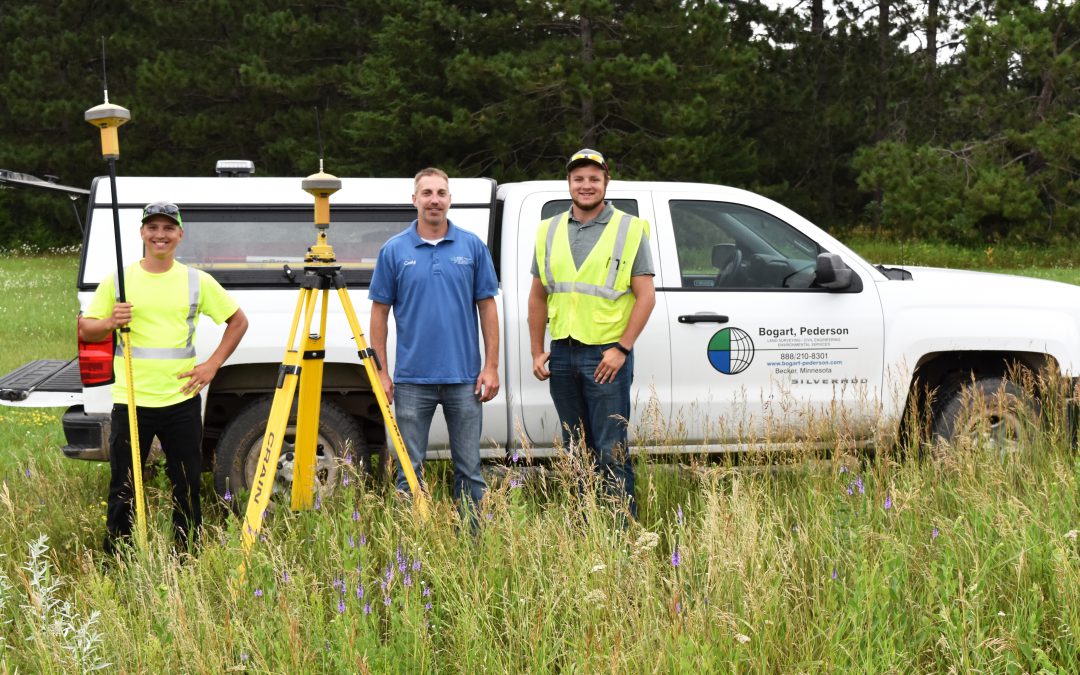 The interns at Bogart, Pederson & Associates (BPA) gained a lot of unique experiences last July. There was the time that Conner Huebner traversed a landfill on foot as part of surveying project, or how Dawson Thom spent a day inspecting a concrete culvert that was wide enough that he and the survey team could climb inside. For these future civil engineers, the phrase ‘working in their field’ is taken literally.

The road to civil engineering
Before securing this internship through SciTech, Huebner came across civil engineering almost by accident. After deciding to change his major, Huebner said, “I found the surveying program at St. Cloud Tech as a bit of a gem among everything else. Once I enrolled, I knew this is what I wanted to do. I kinda got lucky.”

At BPA, Huebner worked as a land surveying technician on one of their field crews. He was out in the field almost every day, and even got the chance to work independently, surveying several miles of road on his own.

“Working on a job step-by-step and seeing it come to fruition,” Huebner said, “that’s what I find most interesting.”

“I love being outside,” said Thom. “So I figured I might as well do something where I get to be outside and actually see stuff go up right in front of me.”

Last summer Thom added a mix of onsite and in-office experiences to his professional repertoire. When not going out for construction inspections, he built upon his drafting abilities, working on both local and private county road reconstruction/design projects.

“There’s also getting to work with residents and real people,” he said. “You have to put yourself in every situation and aspect to see how they might be thinking. Hopefully in the end they turn out pretty happy and it’s good to see that.”

How to make a crew chief
BPA views its internships as an investment in future talent. Craig Wensmann started at BPA when he was 15 years old. Today he owns the company and looks back on his experience and the guidance he received as a model worth repeating.

“We like to encourage growth with our interns and spend time on training,” Wensmann said. “A lot of our competition, they struggle to find valuable employees. I get calls all the time with people asking me, ‘where do you find your crew chiefs?’…Well, we train them. And it’s a long term business plan that seems to be working so far.”

On average, BPA brings in two to three interns a summer and fifty percent of them usually join the team full time. Of the two of them, Thom is returning for his second BPA internship in May and is looking forward to spending his last summer there before he graduates.

“I believe in hard work and training people,” Wensmann said “If you’re willing to jump in as interns and not just sit back, you’ll benefit yourself down the road immensely. You end up being an independent thinker and you’re not worried about taking on tasks and trying new things.”

Get involved
Looking to build your small business workforce? At least 100 internship wage matches are still available to small employers on a first come, first hire basis. Get started today at SciTechMN.org.

Are you a returning SciTech student? Send your current transcript to SciTechMN@mhta.org to reactivate your account. Spring and summer internships are available now.