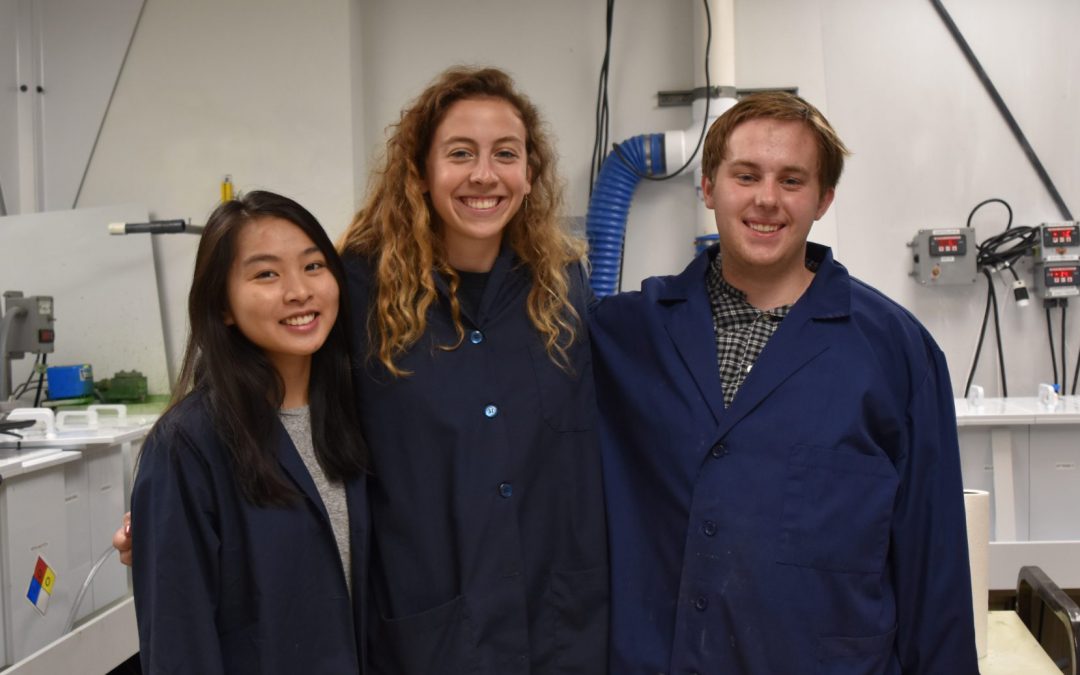 About NanoMotif:
NanoMotif is an early-stage company that creates nanomaterial platform technologies for products such as large touch screen displays and electrochromic glass in automobiles. Formed in 2011, NanoMotif already has a number of patent pending technologies underway, including its high volume, roll-to-roll fabrication processes.

Operating out of the University Enterprise Labs (UEL) in St. Paul, NanoMotif built out its team of lab technicians this past summer by hiring three interns from the University of Minnesota through the SciTech Internship Program. SciTech helped Nano pay for its increased workforce by reimbursing the company for half the intern’s wages, while the interns helped Nano improve their rate of production.

Meet the interns:
Duong Bui is a Chemical Engineering and Chemistry major. Much of her lab time was spent working with NanoMotif’s scanning electron microscope (SEM). Some of her projects included dissolving polystyrene.

Jackson Billion is Chemical Engineering and Chemistry major. He worked with the SEM, and conducted quality checks.

When Billion signed up for SciTech, he said, he was pleasantly surprised by how many interviews he received with small companies looking to hire. Eventually working with Nanomotif, the lab went above and beyond what he’d expected.

“I was surprised by the level of responsibility that they trusted me with,” he said.

Molly Gjerde is a Material Science and Mathematics major. Before her friend recommended the SciTech program, she was feeling defeated looking for work. Once she secured her internship with Nanomotif, however, everything changed.

Gjerde found a lot of autonomy working with a small lab, she said, “I’m not just one drop in the sea of a giant company.”

Over the summer she conducted diffusion tests with glucose and collected data that helped produce a film for diabetes treatments.

“There are so many useful skills that I’ve learned here,” Gjerde said. “Every day is different.”

Get involved
Looking to build your small business workforce? At least 200 internship wage matches are available to small employers on a first come, first hire basis. Get started today at SciTechMN.org.

Are you a returning SciTech student? Send your current transcript to SciTechMN@mhta.org to reactivate your account. Winter and spring internships are available now.