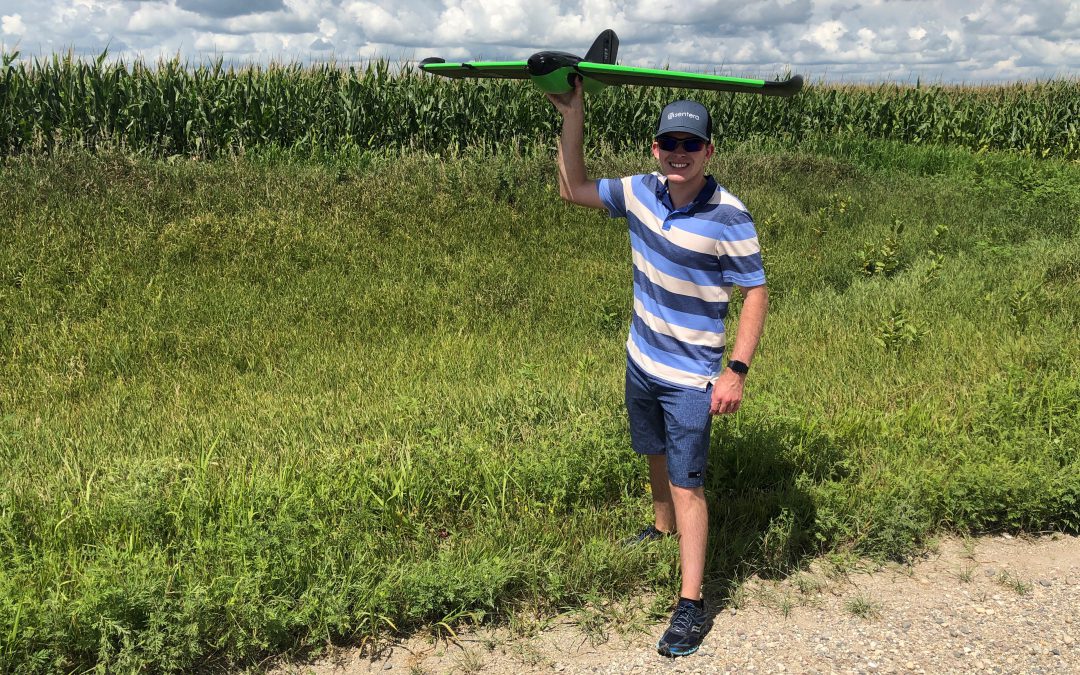 ​About the company:
Sentera is a precision agriculture data company that designs and manufactures drones and their cameras. In the last year or so, their geographic information systems (GIS) team has really taken off, in order to keep up with the growth of their ever-evolving mapping software. When Sentera hired their interns last summer through the SciTech Program, almost all of them were assigned to GIS.

This technology is growing so quickly that Sentera’s engineers need to constantly adapt to grow with it. “I’ve learned a lot from the GIS team and now know what we should look for when hiring for GIS,” said Andrew Muehlfeld, a software engineer at Sentera.

The geospatial technician interns that Sentera needed were individuals with knowledge, experience and interest in the fields of geospatial data processing and analysis, able to apply their skills toward analyzing images of farm fields captured by drones.

About the interns:
Half of the students, Larson, Norris and Kiesow were studying geography at Minnesota State University -Mankato while the other half, Finn, Witthoeft and Brevick studied aerospace and mechanics, and ecosystem management at the University of Minnesota -Twin Cities.

Each intern dedicated their time to a specific project:

“Our internships are all real work,” Muehlfeld said, designed to give the students hands-on opportunities to learn, grow and contribute to Sentera in meaningful ways. When they do that, he said, “interns bring a bottom-line advantage to our company.”

“I felt we were all wanted,” Norris said. “They appreciate us here and I’ve learned a lot.”

Get involved
Make an impact on a future STEM professional’s life and strengthen your talent pipeline. Start planning your internship today at scitechmn.org. At least 100 wage matches are available on a first come, first hire basis between now and August 2021.