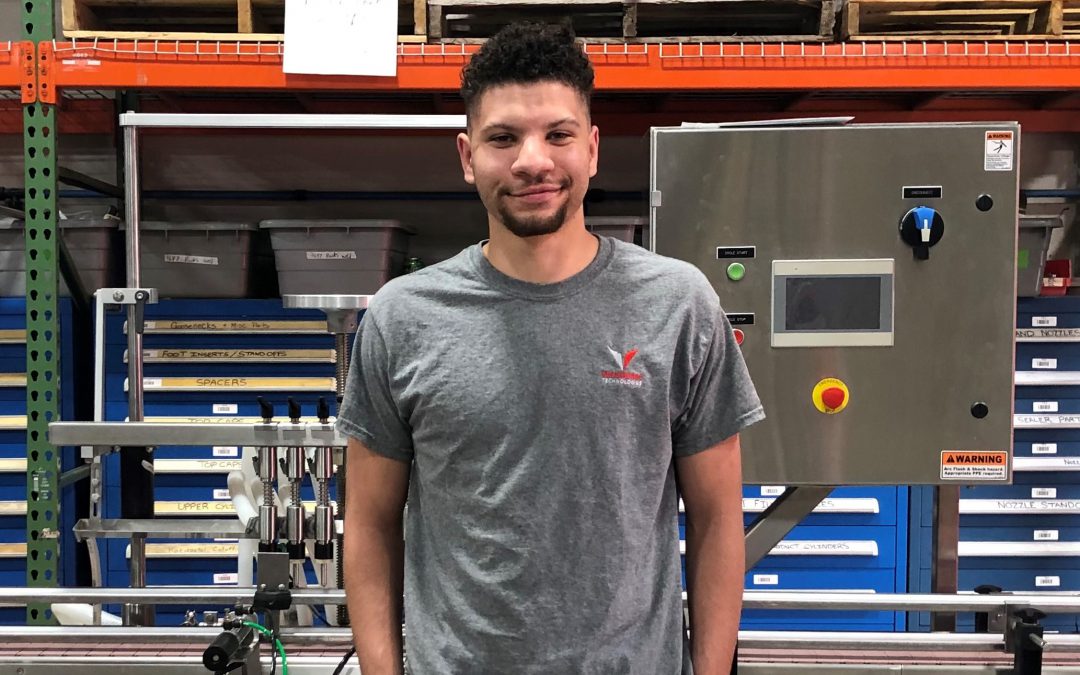 About the company:
Based in Cannon Falls, Minnesota, Volumetric Technologies (VT) designs and builds filling machines and equipment. Though they primarily service the food industry – making, for example, the machines that bottle ketchup – VT found an opportunity during the pandemic to make machinery to fill hand sanitizer bottles as well.

With four new hires in the last week, this small manufacturer is growing fast. But for VT’s “Vice-Master and Commander,” Beth Piper, the ability to hire could, and should, be better.

“In the Cities, people think that Cannon Falls is a million miles away. But it isn’t. We’re 30 miles from St. Paul. Still, getting employees is probably our biggest challenge,” Piper said.

That’s one of the reasons why VT turned to SciTech, an internship program that helps small Minnesota companies like Volumetric Technologies find and hire college STEM majors. This is their second year using the program, and though Piper was initially looking for an engineering intern, VT recently transitioned to a new CAD software and Data management service that required someone with a background in analytics. So, they hired mathematics major Dominic Bledsoe for the job.

Meet the intern:
In addition to studying math, Bledsoe is also minoring in engineering studies at St. Olaf College, which made him ideal for the variety of tasks that he’s been exposed to so far during his VT internship.

Since starting in February, Bledsoe has “jumped around departments” working on inventory, helping with the importing and transferring of bills and materials and even assisting with product testing for the machines.

“That’s one of the things that attracted me to the job, the wide breadth of things that I can work on,” said Bledsoe. “I get to see how all that intersects and how it all leads to a finished product.”

Providing students with that level of exposure is a driving factor for Piper. In addition to growing their company, she’s eager to show off all that small companies can offer.

“I want to give a young person the opportunity to see what it’s like to work for a small business,” Piper said. “My frustration is, I can’t always provide the type of work that is needed for an entry level job. But, what I’m finding is that interns have higher skills at an earlier age than I anticipated, so they can learn quicker than we think they can. For example, this is Dominic’s fourth week and he is already assisting with product testing and numerous other tasks that we reserve for more experienced team members! So by the end of the summer, we’re going to have him designing machines, which is really impressive.”

Before his VT internship, Bledsoe said, “I didn’t necessarily have any machine experience. And now, being able to go out and help with product testing, setting up machines… using that information that I’ve gained, that’s been really rewarding, seeing how much I’ve learned already.”

Get involved
Make an impact on a future STEM professional’s life and strengthen your talent pipeline. Start planning your internship today at scitechmn.org. At least 60 wage matches are available on a first come, first hire basis between now and August 2021.