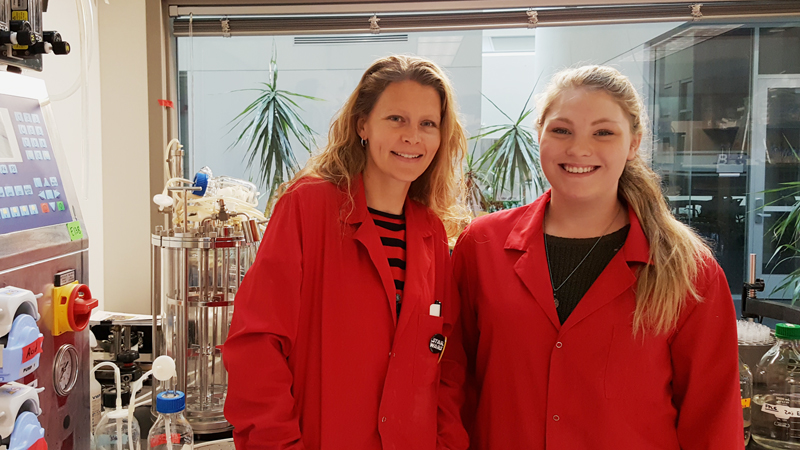 Molly Westfield (above right) knows her way around a research lab. Although she just completed her junior year studying Biochemistry at the University of Minnesota, her initial lab experience goes all the way back to high school. In that first lab setting she worked with graduate student Leah Randles, who is now a PhD Scientist leading protein purification and characterization in the lab at Syntiron. The two have stayed in touch over the years, and are now back together again through the SciTech Internship Program.

Constant change is the nature of the business

Syntiron (pronounced sin-TEER-on) is one of 30+ companies located in the University Enterprise Laboratories (UEL) in St. Paul. Founded in 2004 and a Tekne Award winner four years later, the company is dedicated to the research and development of human vaccines based on iron-regulated bacterial proteins.

“We develop bacterial vaccines,” says Lisa Herron-Olson, Syntiron’s Chief Operating Officer (above left). “Specifically, we focus on critical new vaccines that we don’t have yet that we know are a big medical need.” Lisa says most companies in this space are developing viral vaccines for diseases like Zika and Ebola viruses, which get a lot of attention. In contrast to viruses, Syntiron’s early-stage research focuses on bacteria, which sets them apart because they’re breaking new ground, solving challenges no one else has.

“Bacterial vaccines are really important because antibiotics are not working that well and resistance that prevents these important medicines from working continues to get more problematic every year,” says Lisa. She adds that “bacterial vaccines are harder to make because they are more complex organisms than viruses and have more ways to fight against our immune responses, so we have to figure out how to deal with that.”

Syntiron vaccines target the bacterial iron transport proteins that are critical for causing infection. “Bacteria need iron just like we do,” explains Lisa. “If they don’t get it, they’ll starve, so bacteria devote a lot of their resources to acquiring it.  That gives us a lot of great vaccine targets.” She says the idea behind going after the iron receptors in bacteria is that the iron receptors are much more stable than other vaccine targets in the bacteria, so effective vaccines based on these targets should work against many strains of bacteria, and they should work for a very long time.

The value of interns

Syntiron was one of 60 companies to register with SciTech during the program pilot in 2012, hiring five students.  One of those interns stayed on as an employee after her internship was completed, as have several interns during Syntiron’s history.

Syntiron is happy to return to the SciTech program this year. “It’s always been important to us to have interns,” Lisa says, adding that she and Patty Tam, Senior Scientific Director and Program Manager, like to hire interns because they want to develop the local biotechnology community, the students are helpful, and to find future employees.

“When I posted the position [with SciTech], I received a lot of really good applications,” says Lisa. “It’s too bad we can’t accommodate more students because there’s clearly a lot of interest in working in a lab.”

Learning on the job

While she’s been in a lab setting before, Molly says her work as a Lab Technician at Syntiron is her first technical internship in her field. Currently, her work focuses primarily on lab maintenance, but Lisa says Molly is on deck to learn how to use a flow cytometer this summer. She will be one of the main flow cytometry technicians in the facility when her training is complete.

“With hands-on experience you’re able to learn quicker and get a deeper understanding compared to learning theory in a classroom,” Molly says. Her work at Syntiron has provided a great opportunity to get exposure to the field of Immunology. “I plan to read text books over the summer to learn more,” Molly says. She’ll also be diving into some work in using chromatography to isolate and purify proteins, which Lisa describes as critical knowledge for Molly’s field of study.

“I like the work because it’s always changing,” Molly says. It’s a good fit for her love of learning, a passion that began in her International Baccalaureate Higher Level course in Chemistry in high school.

Molly would love to work full time at Syntiron after graduating because she likes the atmosphere, saying it’s easy to ask questions and everyone is helpful. Graduate school is not out of the question, but she wants to see what working fulltime in her field would be like first.

To learn more or enroll in SciTech, check out SciTechMN.org.