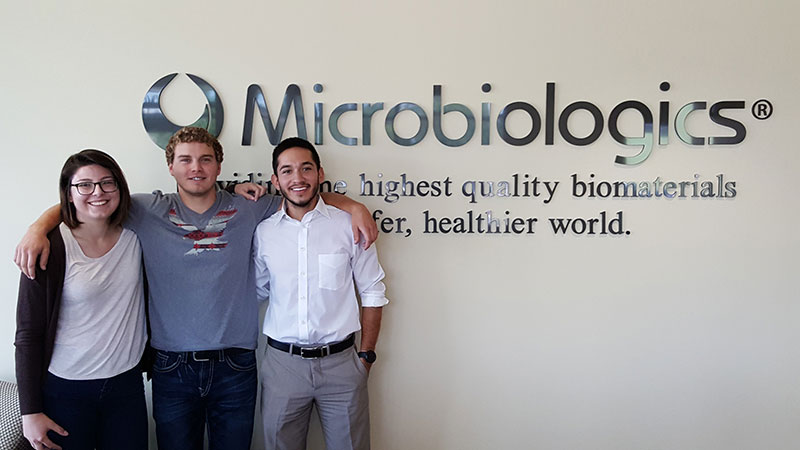 Every year, employees at Microbiologics vie for a seat in the conference room to see the company’s interns make their final presentation. The audience for the presentation includes senior management, supervisors and the few other employees lucky enough to land a spot. “People have been asking to get in and I’m worried that we won’t have enough room,” says Jill Stadel, HR Generalist at Microbiologics.

Located in St. Cloud, Microbiologics is a producer of quality control microorganisms and a highly sought-after place to get an internship. This year’s presentation featured three SciTech interns: Bailey Evenson (left), Coleman Strosahl (center) and AJ Gallegos (right). During a recent site visit, the interns reflected on the skills and experience gained during their internships as they began preparing for the big presentation.

The interns settled in quickly and made impressive contributions over the course of their summer internships. They were able to have an immediate impact in part because of Microbiologics’ friendly and welcoming culture. At the beginning of the summer the interns took a tour of the building and met every single employee at the company. “Everybody says hi to one another and is so friendly,” says Gallegos. A spirit of office comradery helps everybody, but can be particularly important for interns who need to adjust quickly to their new work environment.

The three interns brought a diverse set of skills to the company. Evenson is pursuing a degree in molecular biology, Strosahl in biology and Gallegos in mechanical engineering.

Evenson, Gallegos and Strosahl worked on completely different projects, but a common theme united their experiences. They were all expected to make meaningful contributions and were trusted to do so, as if they were full-time Microbiologics employees. Throughout the summer they were able to lighten the workload for overburdened employees by taking on important duties. The senior lab technicians have ongoing projects that need to be maintained, so if something popped up unexpectedly, they trusted Evenson to take the reins.  When a lab technician went on maternity leave three weeks earlier than expected, Evenson found herself playing an even bigger role. “To some extent I’ve been pulled into the regular rotation in the lab” says Evenson. Hands on experience like this will give the interns a leg up when they enter the workforce after graduation.

Exploring all their options

Students are not generally aware of the full scope of career paths available to them. Professors are excellent advisors when it comes to academic careers, but may not have first-hand experience working in industry. “As a student, you don’t necessarily realize that you can work in a lab like Microbiologics,” says Stroshal. “You have a very limited archetype for what jobs are available,” adds Evenson.

Internships give students a glimpse into the broad landscape of companies and careers they can pursue after graduation. Working at Microbiologics has opened Strosahl’s eyes to this fact. “I came into school as a chemistry student and thought I was going to be a pre-med student,” he says. Now I’m not so sure. Within the last year I’ve wanted to explore all of my options before I commit to one.”

SciTech played a key role in connecting the interns to an opportunity they might not otherwise have known about. Gallegos first heard about SciTech from a classmate who urged him to apply. “They have a lot of internships that you won’t see elsewhere,” his friend told him.

Microbiologics has hired interns through the SciTech Internship Program each year since 2013. Before participating in the program, Microbiologics had hired interns, but the SciTech wage reimbursement made it possible for them to hire three this year. SciTech will fund 270 internships during the 2016/17 program year and it’s not too early to start planning ahead for spring and summer internships. There are a record number of student and companies participating in the program this year. Visit SciTechMN.org to register and get in on the action.