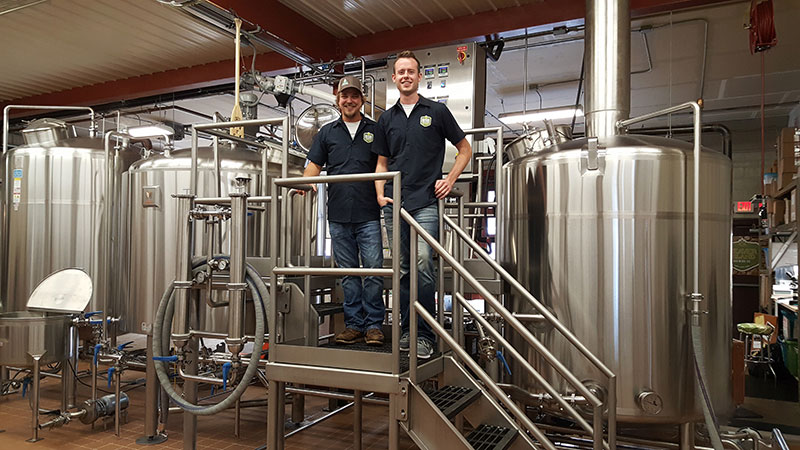 Sam Ellis (right) is a senior majoring in Biomedical Science at St. Cloud State University and on his way to medical school. What makes this fascinating is his current internship: It’s not at a clinic; it’s at Beaver Island Brewing Company in downtown St. Cloud through the SciTech Internship Program. What does a future career in medicine have to do with beer? It’s all about the yeast.

A Recipe for Success

One of the many fun aspects of Beaver Island Brewing Co. is the location of the brewery itself. In the late 1930’s, the space was occupied by a Chrysler distribution center and several items from that era are incorporated into the tap room today. A cabinet that was once used for dispensing oil and grease now houses the brewery’s taps, and still aptly displays the word “lubrication” across the top. Other bits of local history adorn the space as well, including wood from the old Granite Bowl bowling alley lanes, which can be found on the taproom’s bar. The overhead décor sports other reclaimed elements: old sound boards from a radio studio and lighting from a cattle barn at the Minnesota State Fair hang from the ceiling. Matt Studer (center), one of the three founders of Beaver Island Brewing, says, “We like to say we have a lot of stories but not a lot of receipts.” The reclamation made sense financially and gave the taproom a flare and unique identity that Studer proudly relays to visitors.

Like many hobbyists, Studer first became interested in starting his own brewery while dabbling in home brewing. “Everyone who home-brews always kind of has it in the back of their mind: can I do this professionally? Then you get around a table with friends and [the idea] kind of fizzles out,” Studer says.  “I’ve said this a hundred times: it just takes getting the right people to sit around that table to excel it to the next level.”

Studer was a commercial real estate broker when his plans for Beaver Island Brewing were taking shape. This turned out to be an enormous asset in eventually finding the brewery’s current space. Chris Laumb (left), a master brewer with years of experience in developing beer recipes, and Nick Barth, a bar and restaurant owner in St. Cloud, round out the rest of the brewery’s partnership. Together, they bring a wide variety of backgrounds and skill sets to the business.

As alluring as a tap room may be for a college student, Sam Ellis’s work takes place behind the scenes in the brew room. That’s because, in addition to his Biomedical Science degree, Ellis is also pursuing a minor in Chemistry. His previous work experience includes conducting on-campus research in a parasitology lab studying the Toxoplasma gondii parasite. They couldn’t use cultures of the actual organism in the lab due to safety issues, so yeast was used as a substitute. It was his expertise with the properties of yeast that made Ellis an attractive candidate for Beaver Island’s Quality Control (QC) internship. “So I have lab experience,” Ellis says. “This is just a different application of that.”

Ellis’s duties involve recording temperatures, doing yeast cell counts, and running gravity tests to estimate alcohol content in the beer. In addition to running the daily tests, Ellis is designing a QC lab for the brewery’s new production facility, detailing the necessary tools and day-to-day operations for the lab. “He’s really laying the groundwork for what our new quality program will look like,” Laumb says.

The internship has been a great learning experience for Ellis. “I think the biggest thing here has been the autonomy,” Ellis says. “Being given the opportunity by my bosses to actually help develop a QC program – I think that’s something not many students get to do.”

Quality and consistency are top priorities at Beaver Island Brewing, so getting the chemistry right is critical. The crew’s pension for perfection was recently rewarded: Beaver Island’s Octoberfest beer won the 2016 Best of Show award in a blind taste test with 25 other Minnesota competitors, including several well-known brands. The competition was organized by The Growler magazine.

“The SciTech program is great – a no brainer for us to get involved with,” says Studer. SciTech has more than 250 wage matches available for small to mid-sized companies. Learn more and apply at SciTechMN.org. Questions? Contact Program Director, Becky Siekmeier, at beckys@mhta.org.