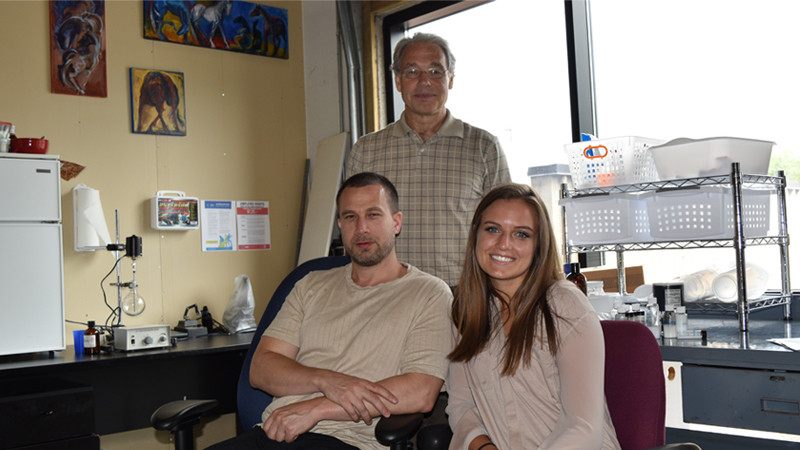 Dynation, LLC, a startup company based in St. Paul at the University Enterprise Labs, is researching and developing a new topical treatment for Osteoarthritis (OA).  The treatment is a novel nanoparticle called a lipoleosome for transdermal (through the skin) delivery of ibuprofen to treat OA.  The ability to deliver ibuprofen selectively to parts of the body that need medication to reduce pain and inflammation is a critical medical need particularly for patients who are unable to take drugs orally to avoid stomach problems.

According to the Arthritis Foundation, OA is sometimes called degenerative joint disease or degenerative arthritis, OA is the most common chronic condition of the joints, affecting approximately 27 million Americans. OA can affect any joint, but it occurs most often in knees, hips, lower back and neck, small joints of the fingers and the bases of the thumb and big toe.  Osteoarthritis leads to pain and inflammation and is both a major health care issue and a complex one.

After a long and successful career in large corporate research and development labs (3M, Samsung Electronics, Ecolab and Imation), Dr. Eric Morrison (above, center), Founder and CEO, Dynation, LLC, embarked on a journey to advance the science of transdermal drug delivery technology. In 2017, he was competitively awarded a $225,000 grant from the National Science Foundation’s Small Business Innovation Research (SBIR) program to research and develop a novel lipoleosome; a new type of liposome (a vehicle for drugs) with a much greater carrying capacity for drugs.  The project was supported through the expert guidance and assistance of Pat Dillon, director, MN-SBIR and the expert scientific expertise and resources at the University of Minnesota, Colleges of Science and Engineering and Pharmacy to include the Department of Chemical Engineering, Chemistry, the Hormel Institute and the Minnesota Nano Center.  Leveraging Minnesota’s academic resources is critical to develop lipoleosomes with ibuprofen to demonstrate the ability to move ibuprofen through the skin for sore joints and muscles.

Dynation also received help advancing this new technology by hiring two interns through the SciTech Internship Program: Leah Schmidt (above right), a rising senior majoring in Biomedical Science at St. Cloud State University, and Doug Nelson (above left), who is studying mathematics and chemistry at the University of Minnesota-Twin Cities.

Dr. Morrison said that making a decision on who to hire was a challenge because he had at least twenty applicants for his two openings. He was looking for candidates who were smart, down to earth, interested in his project and had plans to continue education beyond bachelor’s degree. Both Doug and Leah fit the bill.

Leah is working on making nanoparticles and checking their stability. Doug is primarily focused on measuring how well the nanoparticles move the drug through the skin.

“My most memorable moments have been when I learned something from Doug and Leah that was different than what I thought it was going to be,” said Dr. Morrison. He says he’d tell them, ‘This is the way it is,’ and they’d say, ‘No, that’s not the way it is.’ “I’m really impressed, because that’s what I need to know. I’ve got a theory that I’m working on, and we need to put it to the test.”

“The SciTech interns have enabled this project to accomplish several key aspects of the project’s research goals and outcomes,” said Pat Dillon.

The interns benefitted from working on the project as well. “I really learned a lot from this project; from HPLC to characterization and using real world lab techniques, and the guidance from Dr. Morrison has been great,” said Doug.  Leah added, “Working at the Minnesota Nano Center, I had the opportunity to work with new tools and to learn new ways and methods of characterization.”

Dr. Morrison wasn’t initially considering interns for the project, but said, “Pat told me I need to do this. I am so glad I did.  I wanted interns who were flexible and assertive.  Both Leah and Doug did exactly that.  They did a great job!”

The 2017-2018 SciTech program got underway September 1 and runs through August 31, 2018. MHTA has funding to support a 50% wage match for at least 300 internships this year. To learn more or get started, go to SciTechMN.org or contact Program Director, Becky Siekmeier, at beckys@mhta.org.