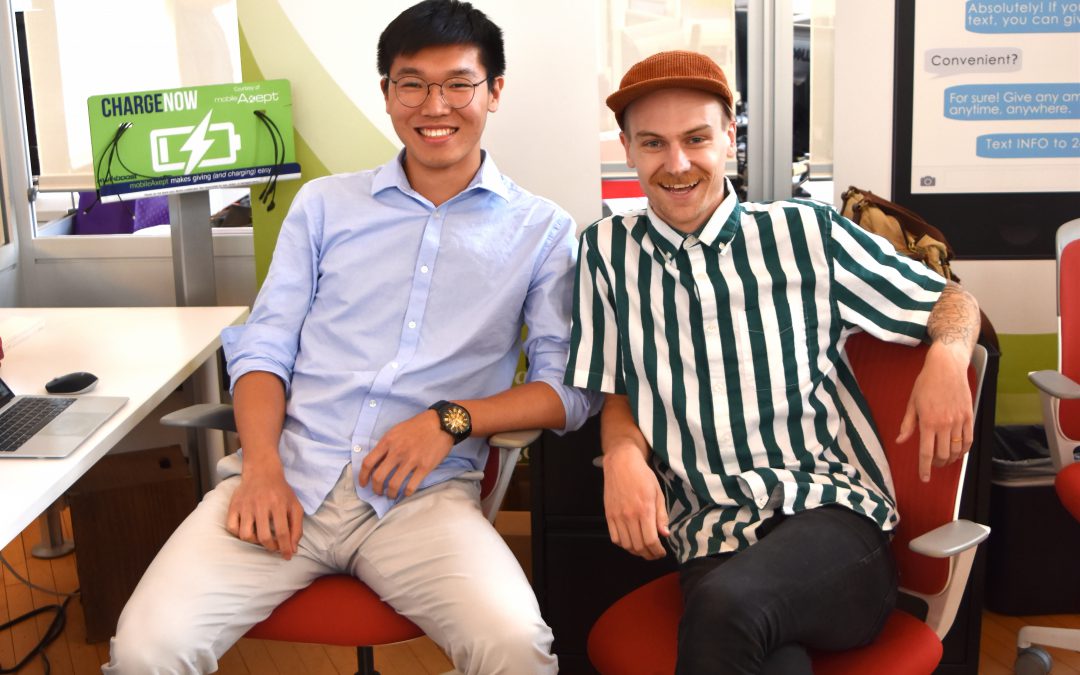 When the small team at mobileAxept brought on Kaiwei Wu to help them with some web development this summer, they didn’t anticipate just how productive their new intern would be.

“The first project I assigned him was meant to last the whole summer,” recalled Spencer Grimes, a mobileAxept software engineer. He was in charge of planning the projects that Wu would be working on, “but then Kaiwei got it done in a week and a half! […] It became clear that he had enough drive and enough problem solving skills that I could give him open ended projects where he could do the decision making.”

Having that independence to problem solve, Wu said, suited him just fine, “Getting to figure things out on your own is actually more fun.”

The ideal candidate
mobileAxept is a text-to-donate service that got its start in Norway in 2006 and has since expanded to accommodate communication and web-based tools for online charitable donation services. When Grimes first posted the web development internship on the SciTech job board, he received roughly 50 applications for the position.

How does an employer sort through so many options, you ask? For Grimes, it came down to identifying someone who had a good balance of both confidence and humility. Candidate preparation was also key. The applicants that came to the interview having researched the company ahead of time made a much stronger first impression and increased their chances of getting a callback.

Thanks in part to his previous internship experience, Wu went into this opportunity with a few good practices that helped him seal the deal. One thing he likes to do prior to every interview, he said, is not only research the company but try and come up with solutions where he could help them improve. Companies don’t just look for someone who is good at finishing their work, they also want to see how much their interns care about the company.

“I’m glad it worked out the way that it did,” Grimes said. “We got a great intern.”

The industry advantage
Apart from solving problems and completing projects in record time, Wu received a lot of learning experience working on projects like writing internal API and developing a design tool for the mobileAxept website that would allow its users to customize their apps, similar to the tailoring options available through WordPress or Wix.

“All the things I’m working on here are new to me,” Wu said. “So it’s been a very good experience getting to learn all these new tools and some of the web programing side of things that I haven’t had the chance to study in school. And sometimes I feel like I learn more from work than from school.”

“I never thought we’d be this close,” he said, smiling. From collaborating in staff meetings to going out for team lunches, Wu found he could connect with his coworkers, chat with his bosses and even talk with the CEO when he wanted to. “I guess you don’t get a lot of chances to see your CEO, right? But I am doing this every day, isn’t it cool?” he said.

mobileAxept interns aren’t limited to the sidelines, Grimes confirmed, “you’re in the discussion. You’re part of the team.”