The Freedom to Problem Solve with American Precision Avionics 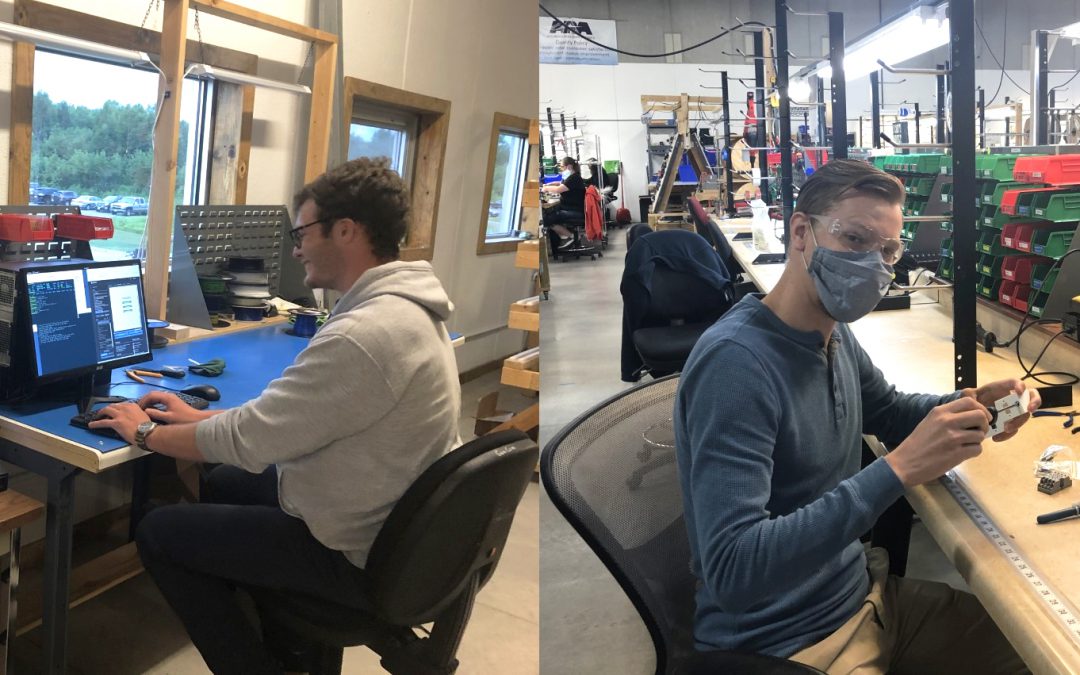 How should small businesses approach hosting internships? Kellen Bolander, the Engineering Manager at American Precision Avionics’ (APA), shared this advice: It’s important to weigh if you want a structured internship or an unstructured one. That will affect the applicants you receive. Bolander has found great success in pursuing the unstructured approach.

“The way Kellen runs the internship program is very freeing,” said intern Woody Smith. “Here we’re told, ‘if you’re interested in something, give it a try. Don’t’ be afraid to ask questions and don’t be afraid to do something.’ The leash is taken off and for me personally, it gives me a drive to want to consistently be working harder to come up with the next big thing that can help us.”

This past spring, Smith joined fellow SciTech intern Alex Haw at APA. Under Bolander’s guidance they both embraced the freedom to experiment and create while working in their field. The industry of note is that of wire harness manufacturing. APA is a contract manufacturer specializing in aircraft wiring harnesses while dabbling in commercial and industrial applications. What is a wire harness, you ask?

“It’s like the circulatory system in the human body,” Bolander explained. “It’s very critical to build them right the first time and we can’t have them fail.”

Searching for solutions
Recently, APA has started branching into other industries as well, including video communication and 3D printing.

“I wanted to experiment with 3D printing,” Bolander said, “and I probably wouldn’t have found the value in that if the interns hadn’t taken to this project and run with it like they did.” Since giving this task to Haw, 3D printing has become fully integrated as one of the services APA provides.

“Alex has really grown our 3D printing capabilities,” Bolander continued. “He’s also taken it upon himself to find other projects where he can apply his skills. Anyway he can, he makes himself useful around the shop.”

One of Haw’s projects involved coming up with a more efficient solution to APA’s 3D printing processes. He suggested the manufacturing team print the relays into a single block, instead of individually, thereby enabling them to install the relays all at once.

Actively looking for areas of improvement and solutions of his own, Smith came across one of his favorite projects that he oversaw at APA. Early in his internship, he observed a group of manufacturers on the production floor filling tubes with wires. They had been taping the tubes shut, but Smith suggested they make a cap to hold things more securely in place.

“It’s very learning oriented here, especially around the manufacturing process,” Smith said. “It was on me to go out and ask questions about the different processes that I was interested in and see what I could do to help.”

Inspiring action
Though there are pros and cons to both a structured and unstructured approach, the results of APA’s freedom-to-problem-solve tactics speak for themselves. Smith and Haw not only learned from their active problem solving on the job, but became exposed to new areas of study that they went on to pursue in school.

“This internship made me more interested in software,” Haw said. So much so that it inspired him to add a software minor to his degree. Staying true to the ‘always learning’ principal, Smith took inspiration from APA’s introduction to the automation process and decided to pursue computer science in his studies as well. But they weren’t the only ones who walked away with more.

“My main driver for continuing the internship program is that students bring in new ideas,’’ Bolander said. “I also want to give back, because I was given so much as an intern myself. Not a lot of people get that opportunity and that experience while they’re still in college. And it’s been helpful, because all the students who’ve gone through internships here at APA now have full time jobs. Hopefully they’ll see the value in that and give it back to other interns in their position as well.”

True enough, Haw has been offered a permanent position at APA and now works there fulltime. Another electrical engineer to pass the torch of opportunity.