TissX Inc: An Internship with a lot of Heart 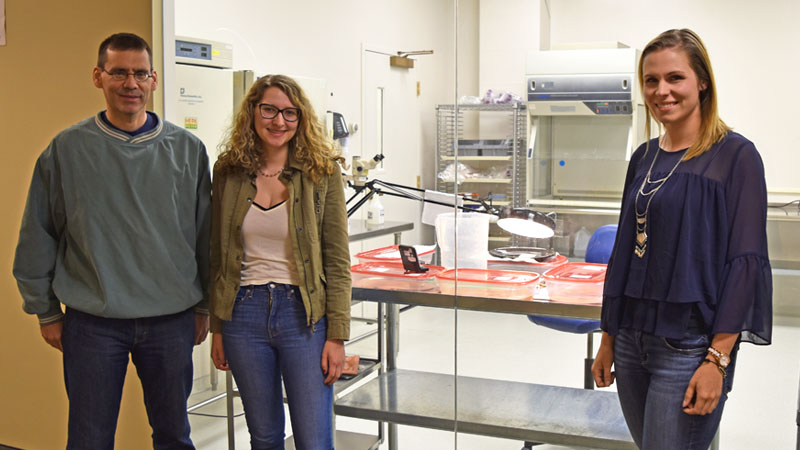 During her spring semester, college junior Paige Aichele interned with a Plymouth-based medtech startup, documenting their procedure for heart valve processing and manufacturing. Unlike other lab internships, this experience connected Aichele with a unique small-business opportunity. She worked side-by-side with a small team of experts dedicated to saving and improving lives.

TissX, short for Tissue Excellence, specializes in raw tissue products and services for cardiac, vascular and specialty surgical applications. More resilient than artificial patches and less likely to be rejected by the human body, their products are used on human hearts for fixed tissue pericardial patches and heart valve repair.

Working primarily with the hearts of cows and pigs, TissX chemically processes patches of tissue until they take on a leather-like consistency. A majority of TissX’s clients are international companies and come from cultures where certain animals, such as cows, are considered sacred. When the doctors in these countries can’t create the leaflets for the heart valves they need, TissX processes the tissue for them. Once the tissue is processed to the point where it can be considered a leather, it’s then acceptable to be used by the specialists in these areas.

TissX hired Aichele, a Chemical Engineering Major and Sustainable Studies Minor at the University of Minnesota, to help them with the process documentation and data analysis as they venture into a new branch of research and development. TissX was eager to add someone new to their team but, like many small businesses, wondered how best to accommodate the extra pay.

“The wage match from SciTech was essential for this start up,” said Alexis Barthel, administrative assistant at TissX. “Getting the 50 percent back, how do you even go wrong with that?”

On its mission to help build and sustain Minnesota’s STEM workforce, the SciTech Internship Program provides a 50 percent wage match for every eligible intern hired through the program, capping their match at $2,500 per student. The program is state-funded, sponsored by DEED and housed at the Minnesota High Tech Association. Apart from helping relieve a portion of the financial cost to hire Aichele, SciTech also provided easy access to the talent pool where she and TissX connected.

Nothing but the Best

When it came to hiring a capable, new member to their team, TissX couldn’t have found a better candidate. In her sophomore year, Aichele had an internship with the National Institute of Water and Atmospheric Research in New Zealand. There, she ran her own wet lab, worked on a costal certification project, and received a grant from the University of Minnesota to conduct personal research during her stay. Aichele heard about SciTech from some of her friends and professors and joined the pool soon after she returned to Minnesota.

Having Aichele join their team, Barthel said, “added a lot of value. She’s only in the office two days a week but it’s been the biggest help. The SciTech program is giving us these valuable interns and getting them in here so quickly and easily. You can’t put a value on that.”

Along with sorting almost a year’s worth of data, Aichele is primarily helping TissX document their lab processes. Before she joined the team, a considerable amount of the process for their work was hand written. It’s Aichele’s job to transcribe and document the previous technique. She also shadows a TissX operator, documenting the new process of building a heart valve.

The Greatest challenge she encountered while on the job, Aichele said, “was the start of documenting valve procedures. I was lost at first but, after asking a lot of questions, I was able to deliver.”

Next week, some of TissX’s International clients are coming to Minnesota to see the product technique that Aichele has been documenting. She’s played a significant role in making it a clear process and they’ll hopefully be taking the valve with them next year.

If patching and improving adult human hearts wasn’t enough, the company aims to set their sights even higher. TissX is currently working to gain FDA approval that will allow them to, one day, move into the realm of pediatric cardiology. This ambitious five-year plan will hopefully allow TissX to enter a very specific field where there is great need for life-saving solutions like theirs and very few companies able to supply them.

“I was floored by all the work that’s coming out of this small company in a strip mall in Plymouth,” Aichele said. “It’s really inspiring to see people who, after working in the medical device industry their whole career, see something that’s missing in the industry and actually take concrete steps to change it.”

The TissX team, Barthel added, “has put a lot of time, effort and heart into their work. You see the passion and the drive behind it which, I think, is what keeps a lot of people here going. We’re small, but we try to make a big impact.”