Adding Sizzle to Sezzle: SciTech Programmer Gets Inside Look at FinTech Start-Up 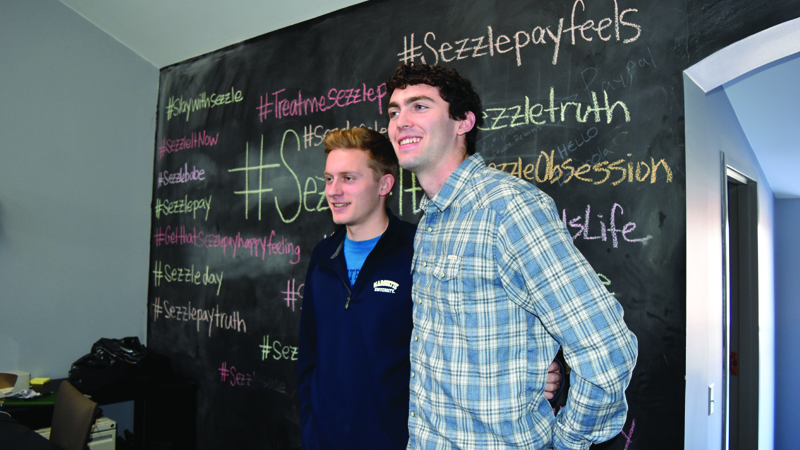 In a remodeled attic on the top floor of the Citadel Building in Uptown, five young programmers are hard at work. Their office includes skylights, a kitchenette, a rooftop patio and the constant sound of typing. This is Sezzle, a payment solution that enables online shoppers to “buy now and pay later,” and the team of programmers who make it all happen.

At its core, this financial technology company (aka FinTech) is designed to appeal to younger shoppers, eager to make big purchases without the fear of acquiring credit card debt. Charlie Youakim, Sezzle’s founder, has experience in payment technology from creating Passport, the company behind Saint Paul’s mobile parking app. Youakim took a new direction when he focused his attention on the pain of processor fees attached to small transactions. His original idea for Sezzle began when he decided to come up with a way to lower transaction costs while giving back to the consumer through rewards for spending.

Now, through online checkouts with one of the 160+ stores that partner with Sezzle, users can make interest-free purchases, the cost of which are broken up and collected in automatic installments over the span of six weeks. Stores that use Sezzle display a webpage widget that appears under a product’s price, displaying the installment amount. 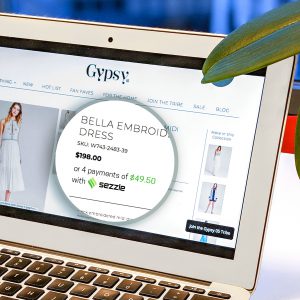 “A lot of stores have found that their sales have risen when they add Sezzle,” said Killian Brackey the Lead Software Engineer and one of the co-founders at Sezzle. “It takes the sticker shock away for people who are looking at larger ticket items.”

The complete list of stores that partner with Sezzle is available here.

Sezzle’s humble team has grown considerably since its inception. Intern Isaac Bremseth, a college junior at Marquette University, is one of the newest additions. He started his internship with Sezzle last May, acquiring the position through the SciTech Internship Program.

“Isaac was the first intern we had here,” said Brackey. Within the software field, he explained, training new employees is expensive. Small companies, especially, want to find individuals who can commit to a long-term relationship. With internships, it’s not uncommon that by the time a person is trained, their internship ends.

By providing easy access to a pool of vetted applicants, Brackey said, “SciTech helped us make the jump into saying ‘let’s do this’ and start acquiring some younger talent in our company.” Their second SciTech intern, Kai Pei, a Mathematics major at Carleton College, will be joining Sezzle as a full-time employee after he graduates this spring.

Learning on the Job

Bremseth’s first week involved getting up-to-speed on the Sezzle app and watching tutorials. From there, Youakim and Brackey gave Bremseth starter programing projects to work on, something small enough that he could tackle with his existing knowledge but big enough to provide a challenge. These initial projects would vary from back-end logic assignments to front-end design for the website and everything in-between.

“Isaac came in right when we were pivoting to a new product,” Brackey said, “and at the same time, in order for that new product to work, we were developing new partnerships with a couple of banks and other software companies, so it was all hands on deck.”

Sezzle currently uses Go, an open-source language, for their back-end coding. It’s about 10 years old now but was still a new language that Bremseth was required to learn. And according to Brackey, he jumped at the chance.

“Within [Bremseth’s] first month he wrote one of our core payment communicators with one of our banks,” Brackey said.  “He took on a lot of responsibility early on. He was building core parts of the system that we rely on now.”

“I enjoy learning on the job,” said Bremseth in response, “I like the pressure, trying to figure something out, or get it to work and trying over and over again to do so.”

This is not Bremseth’s first internship for his major. Prior to working with Sezzle, he interned with SICK Sensor Intelligence in Bloomington, a large, international manufacturing company. When the time came to look into securing a second internship the following year, Bremseth’s interest in startups drew him away from the corporate scene.

As an intern at a big company, Bremseth said, “work was very focused on one thing. I enjoyed it, but there wasn’t a lot of variety, I didn’t get to expand and learn a lot in a bunch of different areas.

“While [at Sezzle], I was able to be here when they were developing and creating all this new software. To be a part of that, to watch and help at certain points, it was very cool. I learned a ton and hopefully helped out a little bit. I really enjoyed the variety of work you get within such a smaller company.”

Bremseth’s advice to other students looking for an internship like this one: “Be very confident.” Bremseth took initiative, sought Sezzle out and emailed its founder directly. He sent him his resume and was bold in his approach, emphasizing that he was a fast learner and he knew he could help their team.

“Charlie emailed back saying something along the lines of, ‘If you’re as a good you think you are, then you’ll be fine.’” The first week, Bremseth admits, he felt almost lost trying to figure everything out. “But I put my head down and worked through it and it turned out to be awesome.”

During his Sezzle internship, Bremseth developed his skills in communication and teamwork -especially when it came to coding. Learning how to use these in tandem with the programing tools and technique he was taught will aid him in the future as he works with other companies or endeavors to start his own. His internship, he added, provided a “better overall knowledge of how small businesses work, and just business in general.”

Bremseth said that the experience has piqued his interest in entrepreneurship and starting his own company. He might even go back to school for an MBA in business after he graduates, but nothing is certain yet.

For Sezzle, Bremseth’s internship opened the company to exploring more internship opportunities like this one. They want to find a way to “bring on someone who maybe doesn’t have anything other than their college experience,” Brackey said, “and try to give them a playground to expand their knowledge and help us along the way.

“For Charlie, I know this experience changed his perception of the benefit of internships and it has pushed us towards accepting more of them moving forward,” said Brackey.

About SciTech
SciTech will support at least 300 internships in 2018 where employers can receive a 50% wage match worth up to $2,500. These internships help employers build their talent pipeline and unleash productivity while providing students with valuable hands-on experience and opportunities to solve real-world challenges. SciTech aims to prepare and retain Minnesota’s STEM workforce by connecting STEM college students to internships that enhance their industry experience and give them exposure to opportunities within the state.