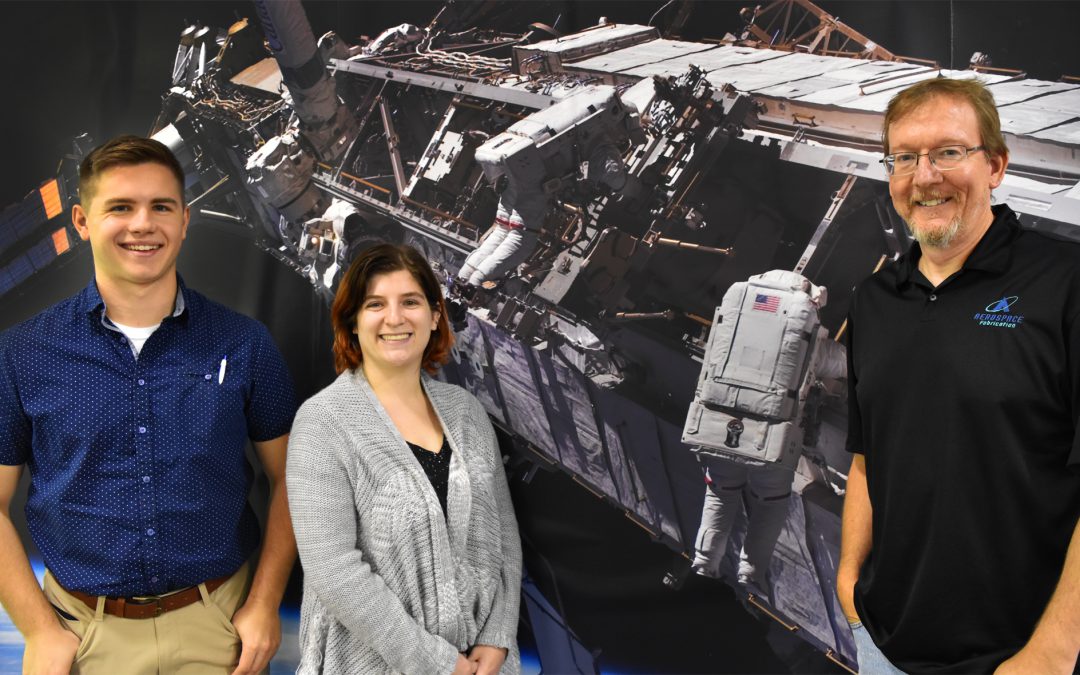 About the Company:
Aerospace Fabrication & Materials (AFM) uses their slogan, “Engineered for the Extreme” quite literally, especially when you consider that making multilayer insulation (MLI) blankets for the international space station is about as extreme as it gets.

To help visualize what this means, picture the space station. That shiny, crinkly material covering the outside was made in part by the engineers and manufacturers at AFM in Farmington, Minnesota.

A photo of the international space station covers one entire wall of AFM’s production floor. During our tour this summer, Brent Anderson, a managing partner and business development manager, pointed out where on the space station AFM’s blankets were placed versus the sections covered by Boeing.

“I call my parents every other day or so,” Epstein said, “and they get really excited when I tell them that we’re working with Boeing or when we have a phone conference with NASA. I hear other people get excited when I explain what’s going on here and that’s just a really fun feeling.”

As aerospace and mechanics engineering majors, finding a local internship in the aerospace industry was a big deal.

“It was very exciting that there was something close by where I could use what I’ve learned in my classes in a real-life experience,” Epstein said.  “And then, when I actually learned more about the MLI blankets and how the heat transfer works, it became more and more interesting as I’ve learned on the job.”

“It’s really cool to get this hands-on experience,” agreed intern Kopesky. “Especially working on things that will go into space while I’m still in school.”

About the Interns:
Amanda Epstein, a junior at the University of Minnesota, worked primarily with AFM’s Cryostat 200 for cryogenic testing. She performed atmospheric pressure tests and collected and analyzed the consequential data. Epstein also helped with plotting and “tetrising” templates and assisted with various fabrication projects.

Austin Kopesky, also a junior at the U of M, did a lot of templating and plotting during his internship. He worked specifically with one of AFM’s engineers for a few weeks as they built out a mechanical analysis spreadsheet to help the engineering team design insulation blankets using technical specifications sent in from AFM’s clients.

“Because they’re just coming out of school and they’ve been exposed to new things, it feels like our interns are able to provide us with a different perspective on how to do things,” Anderson said. “When you’re a small company and you produce a few different products, having that open-mindedness is always a big benefit.”

Get Involved:
Learn more about the SciTech Internship Program, apply online and create your own meaningful internships that support your company and Minnesota’s growing STEM workforce.

Small Minnesota companies receive up to $2,500 to help pay a STEM intern. At least 350 wage matches are available through August 2019.